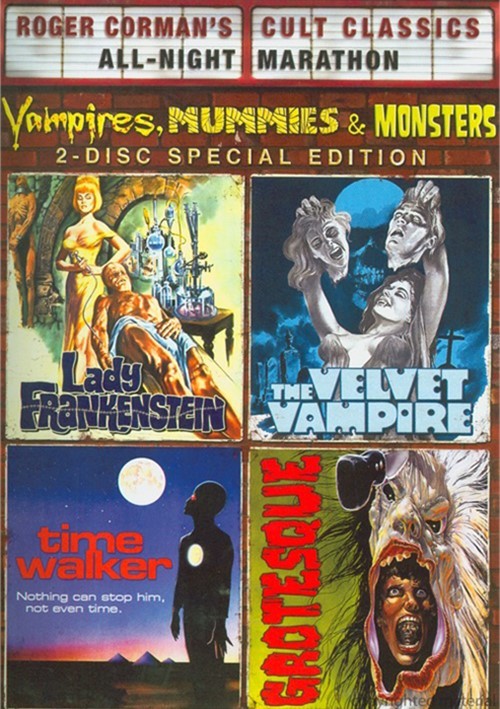 In The Velvet Vampire, a couple accepts an invitation from the mysterious Diane LeFanu (Celeste Yarnall, The Mechanic) to visit her in her secluded desert estate. Unaware that Diane is actually a centuries-old vampire, the couple soon realizes that they are both the objects of her seduction and cravings...

When Baron Frankenstein is killed by his creation, his daughter Tania (Rosalba Neri, a/k/a Sarah Bay) creates her own creature using the brilliant mind of her assistant and the body of her dimwitted servant in Lady Frankenstein. She not only ends up with the perfect lover, but one that can destroy her father's killer. Also starring Joseph Cotten (The Third Man) as Baron Frankenstein.

Lisa (Linda Blair, The Exorcist was looking forward to a nice, relaxing vacation at the family cabin, but instead she bears witness to the brutal death of her friends and family at the hands of a group of mindless punks in Grotesque. As the thugs close in on Lisa, they don't realize they are about to come face to face with something far more horrifying than themselves.

From deep within the tomb of the Egyptian pharaoh Tutankhamen, Professor Douglas McCadden ships the coffin of Ankh-Vanharis to the California Institute of Sciences, where X-rays reveal five diamond-like crystals hidden within the coffin. Technician Peter Sharpe steals the crystals, but he doesn't notice that the powerful X-ray has revived a green fungus. When the coffin is opened at a university press conference, the reporters uncover more than they bargained for. The mummy has disappeared... the Time Walker is alive again!