Planet Of The Apes: The Legacy Collection 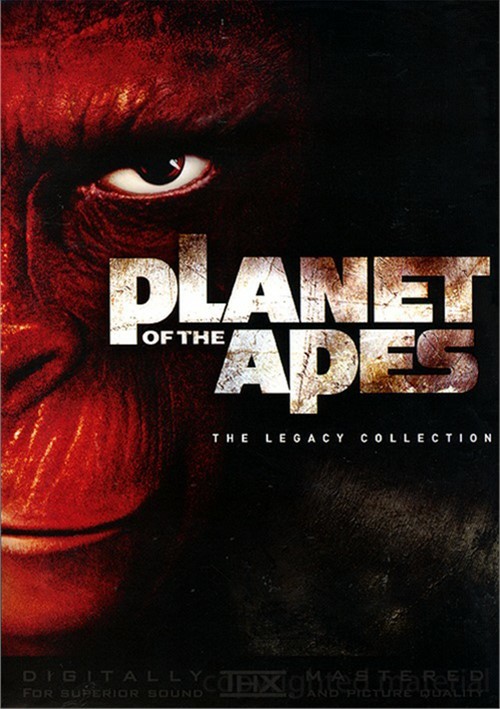 Filled with iconic images, fierce, epic battles and breathtaking twists, these action-packed films revolutionized science fiction...and remain as thrilling and timely as ever!

Charlton Heston stars as an astronaut lost in a world run by evolved apes in this highly influential, OscarÂ®-winning and epic film! (1968)

Beneath The Planet Of The Apes

James Franciscus discovers new horrors on the Planet of the Apes, including a subterranean world of highly advanced humans who worship a WMD! (1970)

Escape From The Planet Of The Apes

Refugee chimps from the feature, Cornelius and Zira (Roddy McDowall and Kim Hunter), are hunted down as an evolutionary threat in twentieth-century America. (1971)

Conquest Of The Planet Of The Apes

In the not-too-distant future, an ape named Caesar (Roddy McDowall) defies his human masters, launching a revolt that will change the way the world is run...and by whom. (1972)

Battle For The Planet of The Apes: Extended Edition

The peaceful coexistence of man and ape is shattered when militant factions of both species clash, igniting an explosive final conflict! (1973)

Battle For Planet Of The Apes: Extended Edition
10 minutes of Never-Before-Released Footage!

Exclusive "Behind The Planet Of The Apes" Documentary Disc
This exciting peak at the film series, its astonishing makeup effects and its stellar cast and crew is hosted by Roddy McDowall and boasts interviews with Charlton Heston, Kim Hunter and more!

Review "Planet Of The Apes: The Legacy"

Reviews for "Planet Of The Apes: The Legacy"