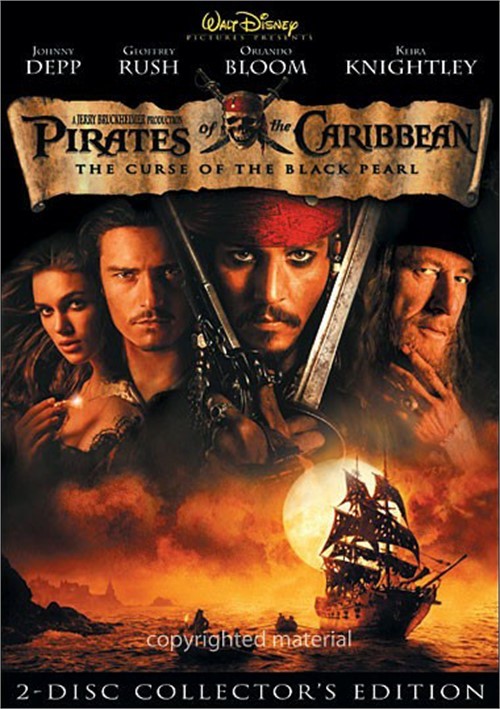 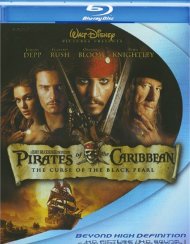 Pirates of the Caribbean

From producer Jerry Bruckheimer (Pearl Harbor) comes Pirates Of The Caribbean: The Curse Of The Black Pearl, the thrilling, high-seas adventure with a mysterious twist. The roguish yet charming Captain Jack Sparrow's (Johnny Depp) idyllic pirate life capsizes after his nemesis, the wily Captain Barbossa (Geoffrey Rush), steals his ship the Black Pearl, and later attacks the town of Port Royal, kidnapping the governor's beautiful daughter Elizabeth (Keira Knightley). In a gallant attempt to rescue her and recapture the Black Pearl, Elizabeth's childhood friend Will Turner (Orlando Bloom) joins f-rces with Jack. What Will doesn't know is that a cursed treasure has doomed Barbossa and his crew to live forever as the undead. Rich in suspense-filled adventure, sword-clashing action, mystery, humor, unforgettable characters and never-before-seen special effects, Pirates is a must-have epic on the grandest scale ever.

Just when the Black Pearl had sailed proudly towards the sunset - the tide, it seems, has turned. Legend now tells of a lost disc. A buried treasure brimming with bonus material that has never seen the light of day. Untold stories, macabre mysteries. But this booty is not without peril - for there is another curse ready to befall those who would plunder these riches. A heinous hex we've chosen to ignore so you can enjoy this rare bounty.

The Lost Disc
Becoming Captain Jack - Johnny Depp divulges revelations abut fulfilling his boyhood dream of playing a pirate and his unique "take" on jack Sparrow.
Becoming Barbossa - Dive Deeper into how Geoffrey Rush fleshed out his character.
Thar She Blows! - The Interceptor, from building it to blowing it up.
The Monkey's Name Is Jack - Meet Levi and Tara, who took turns playing the infamous primate pirate and relive the challenges of working with these two tiny masters of mayhem.
More "Fly On The Set" Featurettes - Join the filmmakers as they create additional key sequences from the movie.
Pirates Around The World - A fun comparison of dubbed versions from across the seas.
Spirit Of the Ride - Johnny Depp, Gore Verbinski and the rest of the filmmakers reflect on their earliest memories of the attraction and how it inspired the film.
"Dead Men Tell No tales" The History Of The Attraction - The heralded documentary previously available only as a PC computer feature.
Sneak Attack Animatic - See the animation the filmmakers created to help them plan this key sequence before shooting it.

Review "Pirates Of The Caribbean: 3 Di"

Reviews for "Pirates Of The Caribbean: 3 Di"