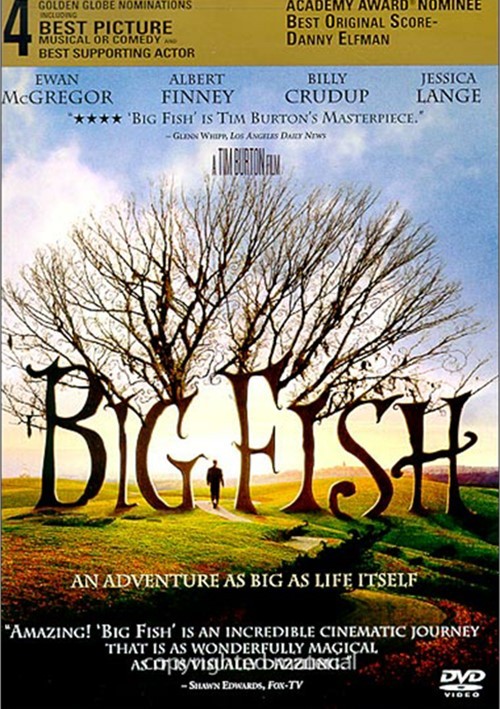 An Adventure As Big As Life Itself.

Throughout his life, Edward Bloom (Ewan McGregor) has always been a man of big appetites, enormous passions and tall tales. In his later years, portrayed by five-time Best Actor Oscar nominee Albert Finney (Best Actor in a Supporting Role, Erin Brockovich, 2000), he remains a huge mystery to his son, William (Billy Crudup). Now, to get to know the real man, Will begins piecing together a true picture of his father from flashbacks of his amazing adventures in this marvel of a movie.

Tim Burton Audio Commentary
The Character's Journey:
Edward Bloom at Large - Take a look at the larger-than-life-world of Edward Bloom.
Amos at the Circus - Danny Devito takes us through the Calloway Circus.
Fathers and Sons - The cast and filmmakers share their thoughts on the Father and Son Dynamic.
The Filmmakers' Path
Tim Burton: Storyteller - a look at the director's process with great moments and insights on how Big Fish came to be.
A Fairytale World - The importance of fairytales and myths and how these elements were incorporated into Big Fish.
Creature Features - Explore the magic of Stan Winston Studios.
The Author's Journey - Bringing "Big Fish" from the page to the screen. Author Daniel Wallace and Screenwriter John August discuss the origins and inspirations for Big Fish.
The Finer Points - A Tim Burton Trivia Quiz