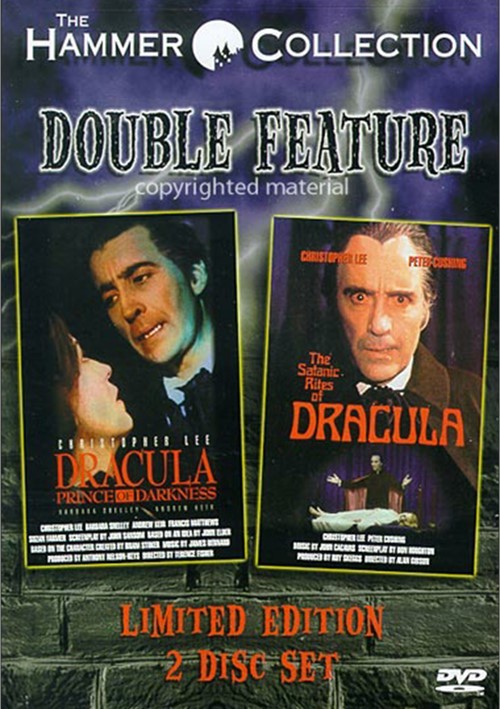 A young party traveling to the Carpathian Mountains receives a strange warning from Father Sandor, the Abbot of Kleinberg, telling them not to proceed with their plans. Despite his advice, the Kents continue but are prematurely abandoned in a forest by their coachman, who refuses to continue after dark. Finally, their luck is changing it seems, when another mysterious black coach appears and delivers them to an enormous, eerie castle where they are offered the hospitality of Count Dracula...

The Satanic Rites of Dracula

London, 1974. Professor Van Helsing (Peter Cushing) is called upon to help British Intelligence monitor five important officials under surveillance at Pelham House. While observing a photo, Van Helsing recognizes an old friend who eventually confesses to his involvement in developing a new strain of plague funded by the mysterious D.D. Denham (Christopher Lee), a reclusive billionaire never seen in daylight. Eventually, Van Helsing discovers Denham's true identity and that he is holding his granddaughter Jessica (Joanna Lumley), the officials and Inspector Murray (Michael Coles) prisoner. Desperate to save his granddaughter, Van Helsing is brought to Pelham, where a series of fiery events lead to the drastic fate of Hammer's most famous villain... Count Dracula. As with Legend of the Seven Golden Vampires, Warner Brothers declined to release this film in the U.S. Five years after it was made, it was released as Count Dracula And His Vampire Bride. This is the original uncut version, digitally mastered from Hammer's archival IB Technicolor print.

Reviews for "Hammer Collection, The: Dracul"