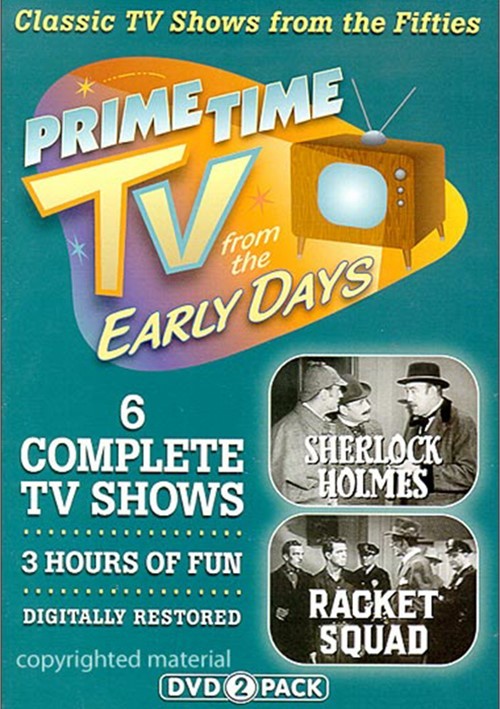 (1954) Sir Arthur Conan Doyle's Sherlock Holmes comes bursting to life in this popular series. Ronald Howard, who plays Sherlock, is the son of Leslie Howard of Gone With The Wind. This complete series was filmed in France with an American cast. H. Marion Crawford plays Watson and Archie Duncan is Inspector Lestrade. Keep an eye peeled for Duncan in other roles when Lestrade is off screen. Brilliant deductions, a deerstalker hat and the calabash pipe make for enjoyable viewing!

While walking home, Watson finds a troubled man and helps him. But the man dies by the time he gets to his flat. Trying to settle his nerves, Watson visits the local pub and upon leaving, claims he was struck in the eye by the dead man, a certain Albert Higgins, curator of a local museum. In classic form, Sherlock investigates what appears to be a ghost and again demonstrates to Scotland Yard and all concerned that he is "the" master detective, magnifying glass and all.

A young woman activist, played by Doreen Meridith, is naively swayed by a women's rights group led by a domineering woman. The group is, not unexpectedly for the time, largely ignored and decides to make a statement by hiring an anarchist to build a bomb. The scheme turns tragic and unveils some truths about the group's leader. Holmes is faced with the difficult task of uncovering the unlikely suspect behind the plot.

An 11 year old boy comes to Baker Street and hires Holmes to find his father, who has been missing for over a week. By observing the boy and hearing his jargon, Holmes deduces his father to be a gambler. An interesting chase of Jack Driscoll, the "Collector" ensues. A personal interest in the boy and the case results and a sensitive Holmes makes every effort to protect the father and son.

(1951-1953) Reed Hadley as Captain Braddock brought thrilling, dramatic, real life stories from Police files all over the country. Every year fraud took more money from the American public than bank robberies and violent crime, and as Captain Braddock warned the audience each week, "It could happen to you". Here are three classic scams.

Commodore Stitch meets Titus Meely, an eccentric millionaire who is interested in clairvoyance. Posing as Von Rincor, Stitch lures Meely to his phony lab where he demonstrates his clairvoyance machine by having his stooge predict horse races and stock prices. Stitch gets Meely to make a large investment in an alleged fuel-less engine. When it fails to work Meely takes things into his own hands.

Two-ex-cons, Fred Brady and Ted Watson, team with Orville Green to scam Fred Huntington, the richest man in town. They convince him to join them on a coon hunt to decide a bet on the best hunting dog. Orville runs the dogs, Brady gets Huntington to fire the gun wildly, and Watson fakes being killed. This leads to blackmail, until Fred's mother gets involved with the Racket Squad.

While visiting a local hospital, Captain Braddock notices a patient getting a lot of attention from doctors, nurses and a reporter. He is told the man is Police Captain Nichols. Braddock, however knows better. He recognizes him as Jim Doyle, a partner in a team that has successfully bilked members of the film industry across the country with fake fire inspections and phony charitable ads.