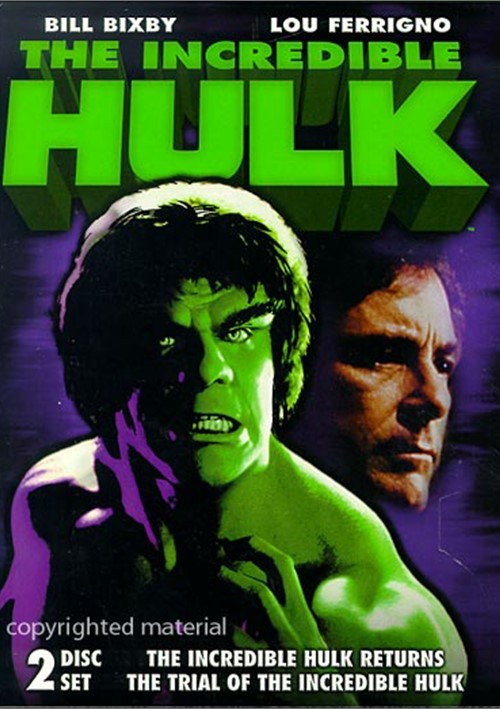 Don't Make Me Angry...You Wouldn't Like Me when I'm Angry!

Although their television series was cancelled in 1982, Dr. David Banner and the raging spirit that dwelled within him were reunited for these two top-rated movie events. In The Incredible Hulk Returns, the green monster's rampage brings him to battle with the Viking warrior known as Thor. And in Trail of the Incredible Hulk, Banner and his beast join f-rces with the one and only Daredevil. Bill Bixby and Lou Ferrigno star in these incredible movie adventures that rage with awesome Hulk action and are packed with exclusive new extras!

The Incredible Hulk is back...But is he any match for the Mighty Thor?

It's been two years since his last transformation, and Dr. David Banner (Bill Bixby) has developed a new Gamma Transponder that he hopes will cure him of his inner monster forever. But when a former colleague unearths the frozen tomb of an ancient Norse warrior king, the Mighty Thor (Eric Allan Kramer) is unleashed upon 20th Century society. Can the Hulk (Lou Ferrigno) end the rampage of this mead-crazed barbarian, or will the two raging beasts become allies to save both the Transponder and the woman Banner loves?

Six years after their hit series ended, Bixby, Ferrigno and Jack Colvin (as nosy reporter Jack McGee) returned for this top-rated television movie. Tim Thomerson, Charles Napier, Lee Purcell and Steve Levitt co-star in this action-packed fan favorite that Stomp Tokyo calls "quite possibly the best thing to come out of the series!"

David Banner faces his greatest challenge...But can any court withstand both the Hulk and Daredevil?

While trying to stop a subway mugging, David Banner (Bill Bixby) is arrested for assault and is defended by blind attorney Matt Murdock (Rex Smith). But when Hulk (Lou Ferrigno) goes berserk and breaks out of jail, Murdock reveals his own secret to David Banner: Blinded by toxic radiation, he stalks the night as the super sensory acrobatic crime fighter called Daredevil. Can two men with uncommon powers now join f-rces to defeat an international crime syndicate or will their raging demons destroy whatever stands in their way?

John Rhys-Davies (Raiders of the Lost Ark, The Lord of the Rings) co-stars as the Kingpin in this top-rated 1989 television film directed by Bill Bixby that features one of the all-time great Hulk rampage scenes as well as a cameo appearance by Marvel Comics' Stan Lee!

Muscling in On Movies-An All-New Interview With Lou Ferrigno

Review "Incredible Hulk, The: The Incr"

Reviews for "Incredible Hulk, The: The Incr"