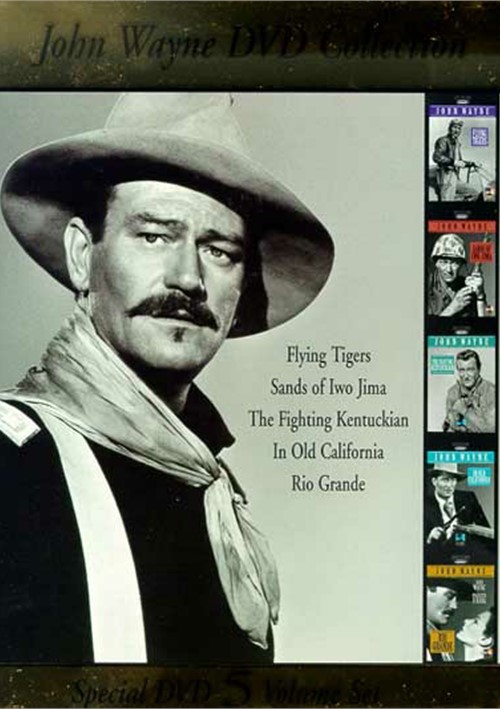 They were the terror of the sky, a small daring band of American mercenaries who soared into battle against the Japanese in defense of China's freedom. They were aces, adventurers and heroes. America's hottest fighter pilots - The Flying Tigers! Possessing unmatched skill and bravery, Jim Gordon (John Wayne), the Tigers' commander, is the top gun of China's skies. But he faces a battle on the ground when his good friend Woody Jason is suspected of recklessly causing the death of a fellow pilot and is accused of stealing Jim's fiancÃ©e. Jim's fight to retain his respect for Woody while maintaining the solidarity of his pilots is an explosive battle of courage and heroism that lights up the sky with action!

John Wayne catapulted from Hollywood leading man to All-American hero with his OscarÂ®-nominated performance as Sgt. Stryker, a hard-nosed Marine sergeant who must mold a company of raw recruits into a combat-ready fighting machine. Feared by many and hated by all, Stryker's training is soon put to the test in a full-scale assault against the Japanese on Iwo Jima - an infamous battle that will live forever in one of cinema's most famous scenes, the flag-raising on Mt. Suribachi.

John Wayne sets the wild "frontier" ablaze in this thrilling romantic adventure! Leading a regiment of Kentucky's riflemen, Wayne passes through a settlement of dispatriated French families, all wealthy refugees of war from Napoleon's court. When there, Wayne's heart is captured by the French general's daughter. But a rich and powerful rival, Blake Randolph, also has his heart set on her. As the two suitors lock horns, Wayne discovers his rival has a nefarious scheme up his sleeve, and soon the courtship battle escalates into a full-scale war. It's "The Duke" at his best as the fighting Kentuckian battles for his love and the land of the free!

Tom, played by John Wayne, is a handsome physician in the gold-rush days of California. He discovers that Sacramento politician Britt Dawson (Albert Dekker) has become wealthy from f-rced tributes levied on ranches. Irate and incensed, he leads the ranchers in a successful revolt against the unfair taxes. In retaliation, Dawson viciously taints a tonic prescribed by Tom, and a patient is killed. Dawson hides the evidence and incites the mob into a furious rage against Tom claiming he's an unfit physician. When gold is discovered at Sutter's Mill, the announcement distracts the crowd, saving Tom from being lynched. How will the local residents feel about Tom when he's the only doctor in town especially when a terrible epidemic breaks out? Will Dawson still be able to make good on his attempts to destroy Tom? The outcome will have you on the edge of your saddle as the action builds to an exciting conclusion.

John Wayne and Maureen O'Hara are embroiled in an epic battle with the Apaches and each other in this John Ford classic! Lt. Col. Yorke (John Wayne) heads to the Rio Grande to fight a warring tribe. But Yorke faces his toughest battle when his unorthodox plan to outwit the elusive Apaches leads to possible court-martial. Locked in a bloody war, he must fight to redeem his honor and save his family. This release also features a fascinating look at "The Making of Rio Grande," hosted by Leonard Maltin.