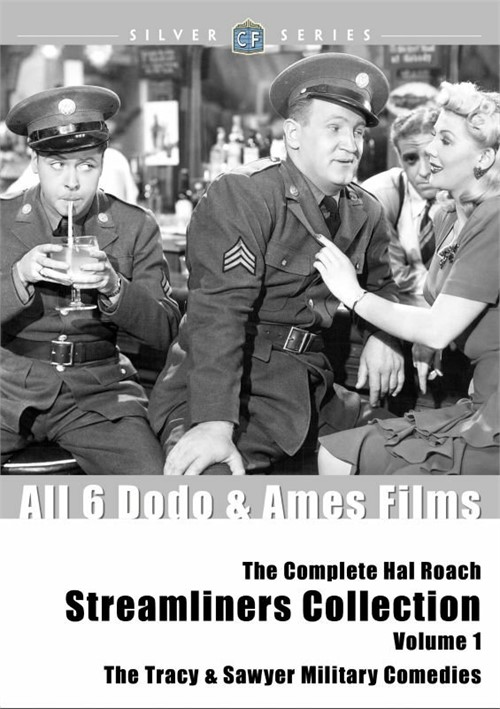 For the first time on DVD come all six Tracy and Sawyer streamliners produced by Hal Roach in this special collection from ClassicFlix! When you hear the word "streamliner," you might picture those high-speed passenger trains from the 1930s to the 1950s. For pioneering movie producer Hal Roach, however, "streamliner" had an entirely different meaning. The man whose film studio was known as the "Lot of Fun" saw a changing landscape in the picture business in the late 1930s and came up with the idea of producing features with shorter run times to accommodate movie houses, as well as cut production costs. The concept would prove successful with 22 streamliners being produced by the studio between 1941 and 1948. Hal Roach premiered his first streamliner in September of 1941: Tanks a Million, a military comedy that teamed William Tracy and Joe Sawyer as catastrophe-prone dogfaces. The popular duo would star in five more service romps for Roach, Hay Foot (1942), About Face (1942), Fall In (1943), Yanks Ahoy (1943) and the Cinecolor produced Here Comes Trouble (1948) -- which was remastered in color from a 35mm print exclusively for this set. This special six film collection is a must-have for any fan of Hal Roach with each film culled from the original Hal Roach Studio masters. Featured players include James Gleason, Margaret Dumont, Noah Beery, Jr., Douglas Fowley, Elyse Knox, Frank Faylen, Jean Porter, Marjorie Lord, Veda Ann Borg, Charles Lane, Betty Compson and Joan Woodbury.