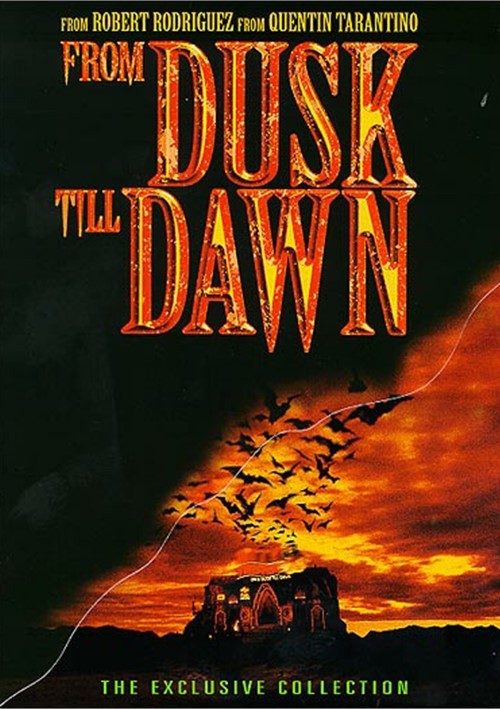 It's nonstop thrills when George Clooney (The Perfect Storm, Three Kings) and Quentin Tarantino (Pulp Fiction) star as the Gecko brothers - two dangerous outlaws on a wild crime spree! After kidnapping a father (Harvey Keitel) and his two kids (including Juliette Lewis), the Geckos head south to a seedy Mexican bar to hide out in safety. But when they face the bar's truly notorious clientele, they're f-rced to team up with their hostages in order to make it out alive!

Get ready for non-stop action when a bank-robbing gang of misfits heads to Mexico with the blueprints for the perfect million-dollar heist! But when one of the key crooks wanders into the wrong bar...and crosses the wrong vampire...the thieving cohorts one by one develop a thirst for blood to match their hunger for money! Ultimately, the last fully human burglar is f-rced to join with his arch rival, a Texas sheriff, in an action-packed, kill-or-be-killed battle to stop these evil creatures and save their own lives!

From Dusk Till Dawn: The Hangman's Daughter

The latest bone-chilling installment of From Dusk Till Dawn reveals how this frightening saga all began! Narrowly escaping death, outlaw Johnny Madrid (Marco Leonardi - Like Water For Chocolate) is on the run from the hangman (Temuera Morrison - Six Days, Seven Nights) ...with the hangman's sensuous daughter Esmeralda by his side! Along with Madrid's gang, Johnny and Esmeralda embark on an adventure filled with colorful and unsavory characters who lead them straight into the fight of their lives! Also featuring Danny Trejo (Con Air), Rebecca Gayheart (Scream 2), and Michael Parks (From Dusk Till Dawn 1 & 2) - you won't want to miss a minute of the epic confrontation that results in Esmeralda's discovery of her secret birthright!

From Dusk Till Dawn 3: The Hangman's Daughter:
Deleted Scene

Review "From Dusk Till Dawn: Collector"

Reviews for "From Dusk Till Dawn: Collector"