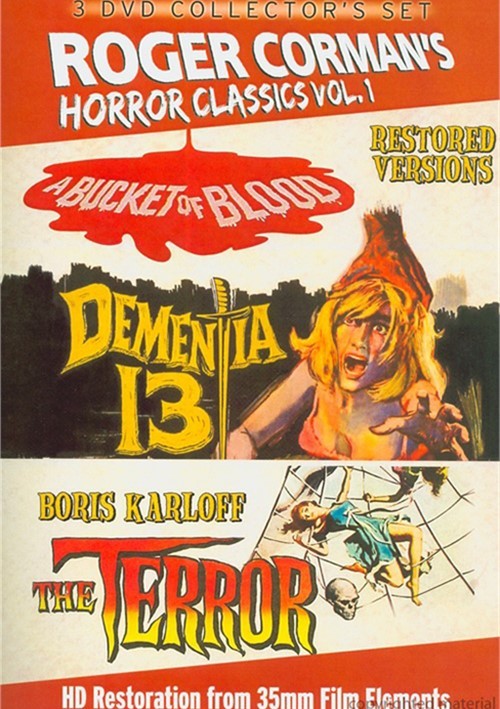 Film Chest Presents The Terror, Dementia 13 and A Bucket of Blood. All classic Roger Corman films in a 3 DVD Collector's set in stunning HD restoration developed from the original 35 mm prints. Roger Corman is one of the most prolific and successful producers that ever worked in film and whose credits include dozens of genuine cult classics. His ability to find and develop talent is incomparable and the films specifically presented here reveal the early skills of Francis Ford Coppola, Jack Nicholson along with character actor, Dick Miller and the classic Boris Karloff. Corman's influence on modern American cinema is almost unparalleled. In 2009, he was honored with an Academy Award for Lifetime Achievement.

A frustrated waiter at a beatnik cafe accidentally kills his landlady's cat and tries to hid the body in plaster. He is mistaken as a brilliant sculptor with requests for more suspiciously lifelike work.

A recently widowed woman travels to Ireland, only to find herself trapped in a creepy, decrepit castle with her ex-husband's demented family.

A solider from Napoleon's 19th century France finds that nothing is what it seems in the ghostly haunted mansion of death.

Before And After Restoration Demo