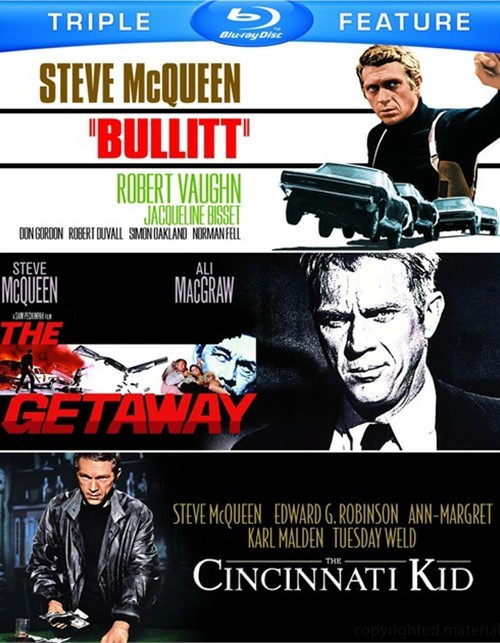 His new assignment seems routine: protect a star witness for an important trial. But before the night is out, the witness lies dying, and cool, no-nonsense Detective Frank Bullitt (Steve McQueen) won't rest until the killers are nailed. Bullitt crackles with crisp dialogue and the iconic scenery of San Francisco. This Oscar winner for Best Film Editing (1968) features one of film's most memorable car chases.

Steve McQueen (The Great Escape) and Ali MacGraw (Love Story) are at their finest as husband and wife thieves on the run in this classic Sam Peckinpah (The Wild Bunch, Straw Dogs) action-thriller. The sizzling screenplay by Walter Hill (The Warriors, The Driver) is based on a novel by pulp legend Jim Thompson (The Grifters, After Dark, My Sweet). The #5 box office hit of its year! Later remade with Alec Baldwin and Kim Basinger.

Steve McQueen brings his cool fire to the role of the Cincinnati Kid, a small-timer eager to take his chances in high-stakes poker. Regal, ruthless Lancey Howard (Edward G. Robinson) accepts the Kid's challenge. Norman Jewison (In The Heart Of The Night, Moonstruck) directs this taut exploration of backroom gaming, building suspense with each turn of a card. Ann-Margret, Karl Malden, Rip Torn, Joan Blondell and more comprise a full house of talent. Grab a chair and ante up.

Reviews for "Bullitt / The Cincinnati Kid /"