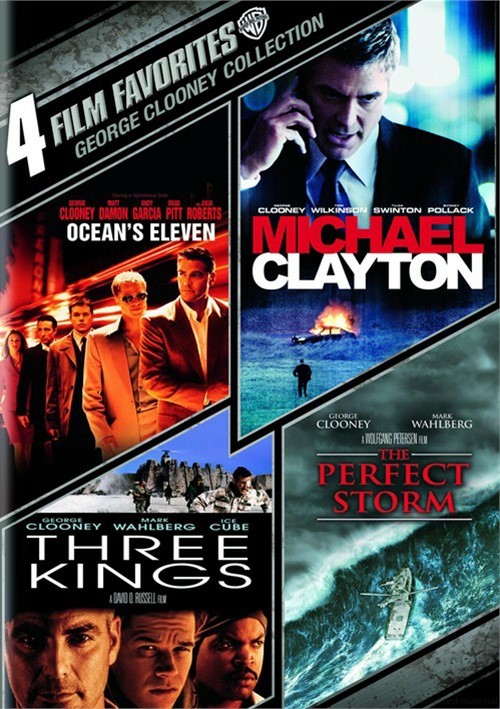 The skill of Academy AwardÂ®-winning director Steven Soderbergh combines with enough starpower to light up the Las Vegas strip in this classy caper. George Clooney plays Danny, defying the odds in a split-second heist of three Vegas casinos - all owned by a magnate (Andy Garcia) who is dating Danny's ex-wife (Julia Roberts). A fixer (Brad Pitt), a pickpocket (Matt Damon), a blackjack dealer (Bernie Mac), a flimflammer (Carl Reiner) and others in well-defined roles are with Danny. Are you in or out?

Atlantic swells form 100-foot walls. Wind shrieks at a maxed-out F-rce 12. In October 1991 three raging weather fronts - one of them Hurricane Grace - combine to form the greatest storm in recorded history. George Clooney and Mark Wahlberg lead a talented cast in this harrowing special-effects adventure that intercuts the plight of seafarers struggling to reach safe harbor with the heroics of air/sea rescue crews. Directed by Wolfgang Petersen, The Perfect Storm tosses excitement your way in waves.

Absurdly comic, highly kinetic, at times shockingly emotional, Three Kings begins when the Gulf War is over. Amid the partying and confusion, four American soldiers (George Clooney, Mark Wahlberg, Ice Cube and Spike Jonze), determined to take home more than sand fleas, go off into the Iraqi desert to find millions in stolen Kuwaiti bullion. They are plunged into the heart of a democratic uprising that spins the day and their lives out of control. David O. Russell's unique tapestry of humor, violence and history makes Three Kings "one of the best movies of the year." (Roger Ebert, Chicago Sun-Times)