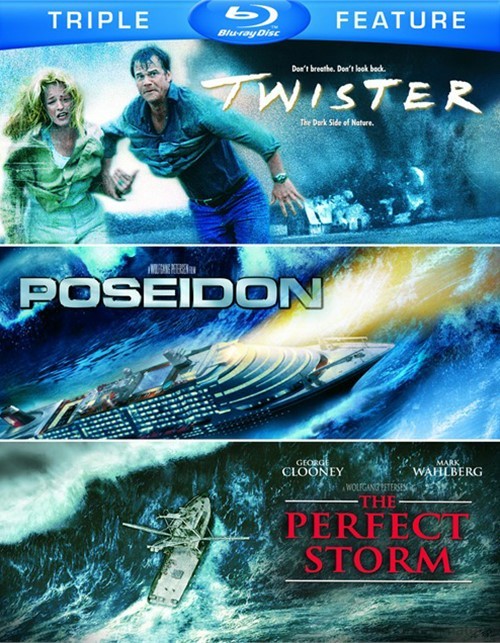 A mile-wide, 300 miles-per-hour f-rce of total devastation is coming at you! In this adventure swirling with cliffhanging excitement and awesome special effects, Helen Hunt and Bill Paxton play scientists pursuing the most destructive weatherfront to sweep through mid-America's Tornado Alley in 50 years. By launching electronic sensors into the funnel, the storm chasers hope to obtain data to create an improved warning system. But to do so, they must intercept the twisters' deadly path. The chase is on!

New Year's Eve on the Poseidon: partying voyagers toast the future. It comes in a rush: a 150-foot rogue wave flips the cruise ship over . . . and a struggle to survive begins in this thrill-packed, cutting-edge adventure. A stellar cast including Josh Lucas, Kurt Russell, Richard Dreyfuss, Emmy Rossum and more play passengers who must rely on each other as they seek safety through the water, flames and wreckage of an upside-down world.

Atlantic swells form 100-foot walls. Wind shrieks at a maxed-out F-rce 12. In October 1991 three raging weather fronts - one of them Hurricane Grace - combine to form the greatest storm in recorded history. George Clooney and Mark Wahlberg lead a talented cast in this harrowing special-effects adventure that intercuts the plight of seafarers struggling to reach safe harbor with the heroics of air/sea rescue crews. Directed by Wolfgang Petersen (Poseidon), The Perfect Storm tosses excitement your way in waves.

Reviews for "Twister / Poseidon / The Perfe"