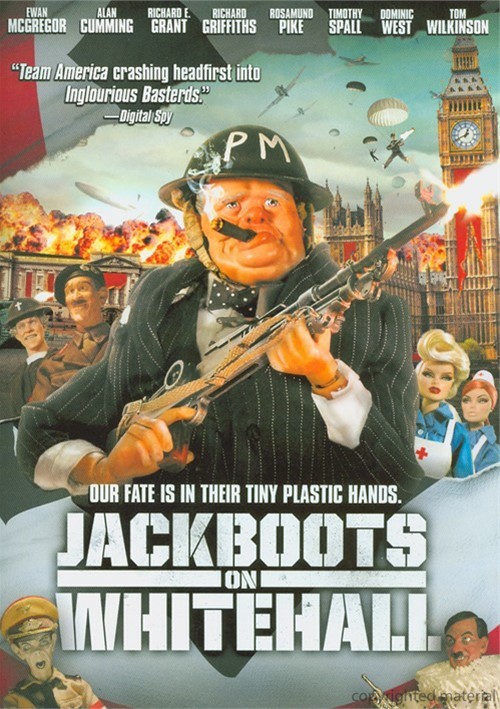 Our fate is in their tiny plastic hands.

On the English South Coast, Chris (Ewan McGregor, Star Wars: Episodes 1-3), a young farm worker, dreams of the chance to join the army and fight in exciting new lands. His chance comes when the three top Nazis-the enormous Goering, the malnourished Goebbels and the scarily campy Himmler-hatch a plan to invade England by drilling under the English Channel and into the heart of London. With the entire British army stuck in Dunkirk and no military support to defend the country, Churchill (Timothy Spall, The King's Speech) issues a final radio broadcast from his bunker in Downing Street. Upon hearing the broadcast, Chris rallies the reluctant villagers, aided by American pilot Billy Fiske (Dominic West, The Wire), demanding that they help save England - and the world! Tom Wilkinson (Michael Clayton), Alan Cumming (X-Men), Rosamund Pike (Barney's Version), and Richard E. Grant (Withnail And I) round out the all-star voice cast of this riotous supermarionation epic.

Behind The Scenes Footage
Interviews With The Creators
Featurettes: The Swastikas, Bad Day To Be A Nazi, Hitler's Rat Pack, The Nazi Hotties, Explosions, Voiceovers

Reviews for "Jackboots On Whitehall "