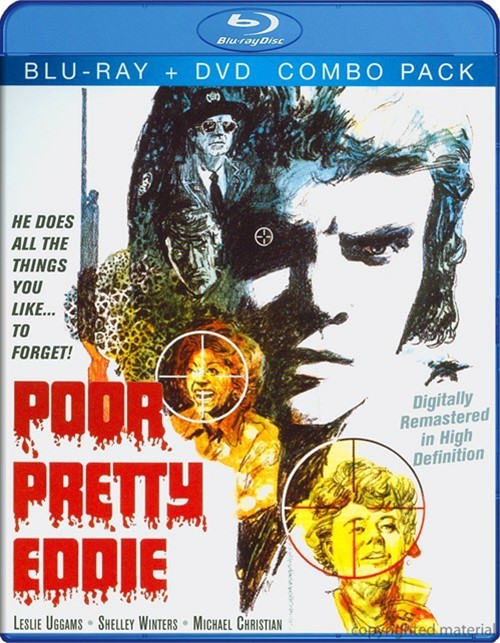 He does all the things you like...to forget!

It's a surreal psycho-thriller that broke all the rules of political correctness and lowbrow film-making as it spun the sordid tale of a black singer from the big city, Liz Wetherly (Leslie Uggams), who finds herself stranded in a backwoods redneck nightmare that makes Deliverance look like a day at Disneyland in comparison.

Poor Pretty Eddie spend years existing as one of those mythical, "must-see...if you can find a copy" films. As copies began to make the rounds, and as more movie buffs were able to view it, reports of the movie's content focused as much on the detailed, almost art-house, approach to mane of the scenes as they did on the film's obvious seediness and dark storyline.

When her car breaks down, Wetherly ends up stuck in a remote southern town that's been left for dead "ever since they put in the interstate." She is f-rced to stay in a dilapidated inn that serves as the bizzaro kingdom of faded, overweight burlesque star Bertha (Shelly Winters), her much younger boy-toy and aspiring Elvis wannabe, Eddie (Michael Christian), and a cast of suitably strange townsfolk - including Sheriff Orville (Slim Pickens), and Keno (Ted Cassidy aka Lurch from The Addams Family). Over the years, the film also appeared on the drive-in circuit under the titles Black Vengeance and Heartbreak Motel. But whatever you want to call it, it's not a movie you will soon forget!