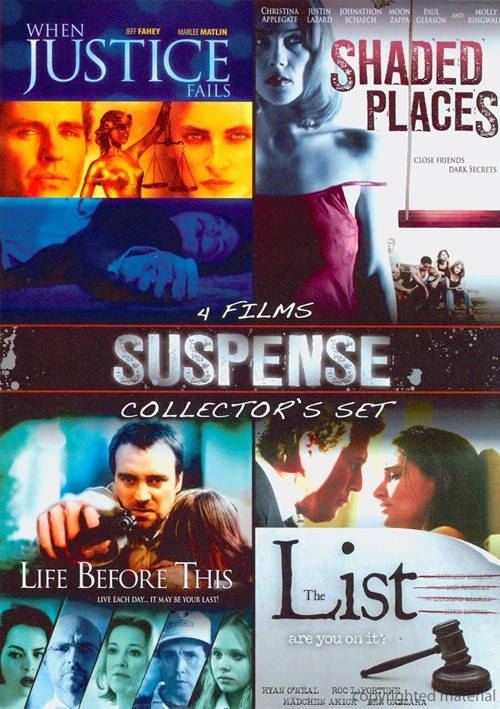 A serial killer is murdering suspected rapists and shearing their heads as a bizarre trademark. Detectives Tom Chaney (Jeff Fahey, TV's Lost) and Rod Lambeau discover a connection: many were prosecuted by beautiful attorney Katy Wesson (Marlee Matlin, TV's The L Word). As Chaney falls for Katy while the investigation continues, he unravels her dark, complicated past . . . one that may be key to solving the case.

A group of high school friends are invited by Emily (Christina Applegate, TV's Samantha Who?) to her cabin for a relaxing weekend of reminiscing. But Emily has a disturbing secret to share. One that connects them all . . . forever. As the friends dig through their pasts, they find themselves in the midst of an explosive nightmare that, at any moment, threatens to became a deadly reality.

After a holdup goes awry, two gunmen open fire on several people at a cafe. A flashback replays the day of each of the victims, including a dating middle-age woman (Catharine O'Hara, Home Alone), an unethical attorney (Joe Pantoliano, Memento), a grieving bug exterminator (Academy Award nominee Stephen Rea, V For Vendetta), a troubled college student (Sarah Polley, Dawn Of The Dead), a TV star's daughter, and a peer pressured pre-teen. These victims learn quickly that a single moment can change everything.

After a powerful judge is caught with Gabrielle, (Madchen Amick, TV's Twin Peaks) a high-class call girl, an all-out war of revenge and murder unfolds in this thrill-a-minute crime drama. In court, Gabrielle produces a list of her wealthy clients to Judge Richard Miller (Ryan O'Neal, TV's Bones). If the list is used as evidence, reputations will be ruined. Powerful men will fall. Families will be broken. Judge Miller is threatened - show it to no one. But some are willing to do more than threaten to keep the list from becoming public. Some are willing to murder.