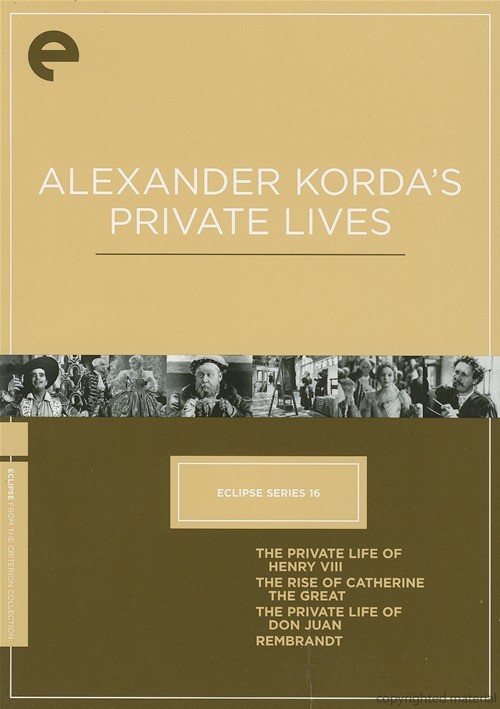 Though born to modest means in Hungary, Alexander Korda would go on to become one of the most important filmmakers in the history of British cinema. A producer, writer, and director who navigated toward subjects of major historical significance and mythical distinction, Korda made a name for his production company, London Films, with the Oscar-winning The Private Life Of Henry VIII. He then continued his populist investigation behind the scenes and in the bedrooms of such figures as Catherine the Great, Don Juan, and Rembrandt. Mixing stately period drama with surprising satire, these films are exemplars of grand 1930s moviemaking.

The Private Life Of Henry VIII

Charles Laughton gulps beer and chomps on mutton, in his first of many iconic screen roles, as King Henry VIII, the ultimate anti-husband. Alexander Korda's first major international success is a raucous, entertaining, even poignant peek into the boudoirs of the infamous king and his six wives.

The Rise Of Catherine The Great

A quick-witted and compelling dramatization of the troubled marriage of Catherine II (played by German actress Elisabeth Bergner, in her English-language debut) to Peter III (a randy Douglas Fairbanks Jr.) and her subsequent ascension to the throne as Empress of Russia.

The Private Life Of Don Juan

Douglas Fairbanks Sr. makes his big-screen swan song with Korda's deliciously satiric deflation of the Don Juan myth. After having faked his own death and escaped Seville, the aging lothario returns, only to find that he has been forgotten; perhaps Merle Oberon's beauty can coax him back.

Charles Laughton once again teams up with Korda for this moving, elegantly shot biopic about the Dutch painter. Beginning when Rembrandt's reputation was at its height, the film then tracks his quiet descent into loneliness and isolated self-expression.