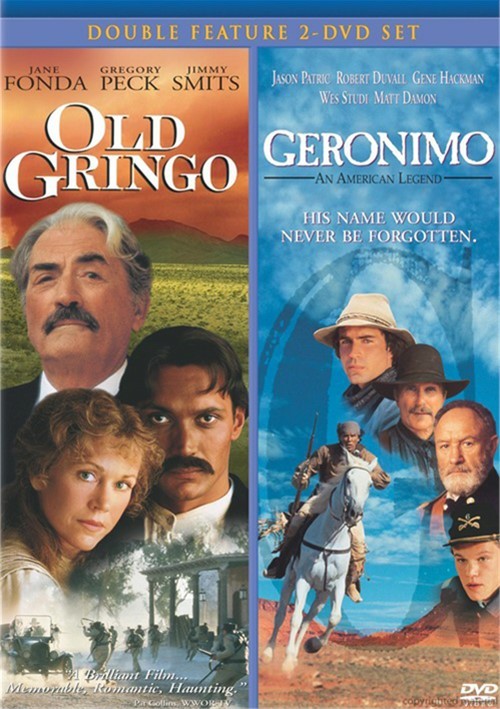 Academy Award-winner Jane Fonda (Best Actress, Coming Home, 1978; Klute, 1971) is Harriet, a frustrated spinster who flees her unrewarding life in America hoping to discover the passion in her soul.

Academy Award-winner Gregory Peck (Best Actor, To Kill A Mockingbird, 1962) is Ambrose Bierce, the Old Gringo, a retired journalist and adventurer who wanders through the hostile desert seeking some meaning to the last years of his life.

Jimmy Smits is Arroyo, the fiery young general, driven by both the Revolution and his desire for Harriet.

Set in the spectacle of the Mexican Revolution, their lives become inexplicably drawn together as they face love, death and war in the adventure of a lifetime.

An American legend comes to breathtaking life in this explosive epic western starring Jason Patric, Robert Duvall, Gene Hackman and Wes Studi as Geronimo. Studi (The Last of the Mohicans) gives a stunning performance as the fearless warrior who was the last Indian leader to surrender to the white man. Betrayed by the Army's legendary "Indian fighter" General George Crook (Hackman), Geronimo leads a small band of warriors in escape. Pursued by a principled officer (Patric), a grizzled army scout (Duvall), and a gung-ho West Point graduate (Matt Damon), Geronimo evades capture through brilliant military strategy and cutthroat courage. His true story is both an action/adventure and a spiritual journey through the heart of a warrior. "Two thumbs up for Geronimo: An American Legend, a visually stunning elegy to the last of the great Apache leaders." (Siskel & Ebert)