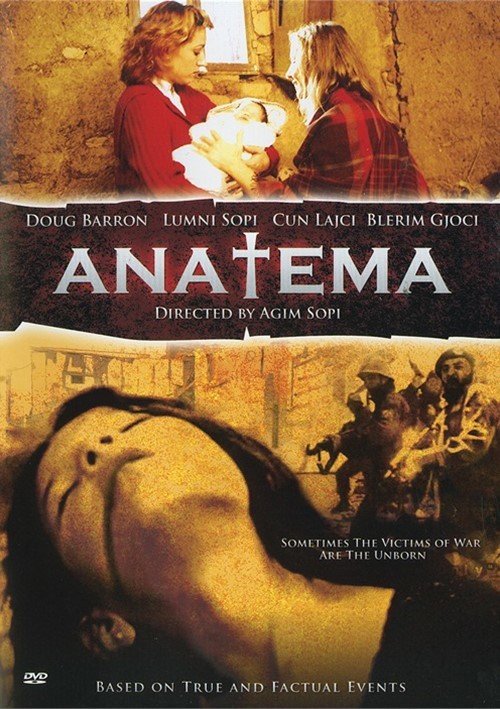 Sometimes The Victims of War Are The Unborn

An epic story of war crimes committed during the Balcan War, Anatema tells the story of Kosovar journalist Emma Berisha, working with two American journalists, Laura and David Schwartz, who find themselves in the flames of the war in Kosovo. Confronted by the invasion of the Serbian f-rces, they are miraculously escape. They report to their news agency, but when they discover that NATO f-rces will intervene and the Americans have been ordered to leave Kosovo immediately, David and Laura try to persuade Emma to leave with them. Emma is determined to remain in her homeland and to reunite with her beloved, Edi. Upon her return to her home in Pristine, the Serbian f-rces have begun the f-rced exodus of the Kosovar population. Emma, together with her fiance Edi and his family flee Pristine. They arrive at a shelter in a village in the highlands. One night Serbian f-rces lay siege on the village where Emma and Edi are hiding. Emma is captured and thrown together with other Kosovar woman, where they are gangd by the soldiers, then expelled to Albania. Emma learns through the Red Cross that her fiance is being held in a Serbian prison in Nish.

After the war, Emma returns to a burnt and destroyed Kosovo, to find nothing left. Powerless and now pregnant from the, she waits anxiously for her husband to be released of prison and return to her. She gives birth to a baby girl which she names Ana. All her relatives look upon Ana as a misbegotten child that should be gotten rid of. But Emma insists that the child is fathered by her husband. Doubted, disappointed and abandoned by all, unable to financially and physically care for her newborn, Emma reluctantly decides to temporarily leave her baby with an orphanage. In the mean time, the American journalist David returns to postwar Kosovo. They reunite and David gives Emma her salary due for her work before they were parted. Feeling rescued Emma flees with the money to get back her baby. She discovers the orphanage is closed and the children have been moved to another orphanage, to the Saint Maria Monastery, which has been turned into a brothel and center for human trafficking. Emma's refusal to give up puts her life once again at risk but faith would eventually be on her, and her daughter's side.