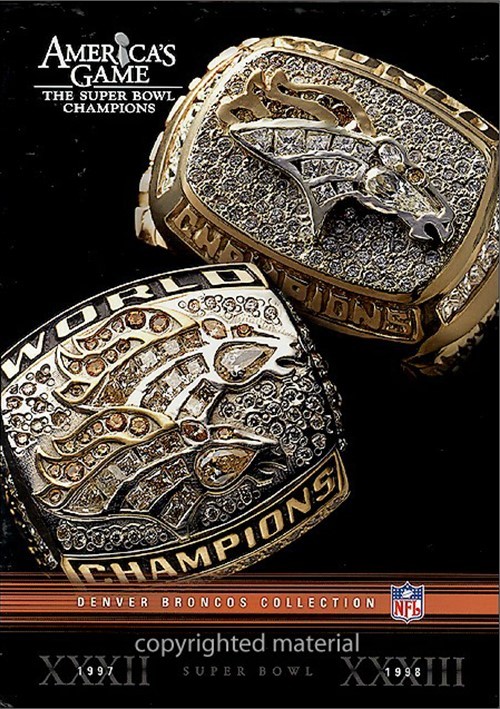 The Denver Broncos have one of the greatest winning traditions of any NFL team in the years since the 1970 AFL-NFL merger. But although the Broncos had made it to the Super Bowl four times (XII, XXI, XXII, and XXIV), they had come up short each time. That all changed in the late '90s.

In 1997, entering his 15th NFL season, Denver quarterback John Elway had one thing missing from his resume: a Super Bowl ring. This year, Elway had all the help he needed-head coach Mike Shanahan, one of the most innovative minds in football; Terrell Davis, the AFC's leading rusher; and a defense studded with stars like Steve Atwater, Shannon Sharpe, and Neil Smith.

Denver finished the regular season at 12-4 and entered the playoffs as a wild card. Three playoff victories later, the Broncos had reached Super Bowl XXXII. There, against the defending champion Green Bay Packers, Elway captured that elusive championship.

With just three games left in the 1998 season, the 13-0 Denver Broncos looked like they might join the 1972 Miami Dolphins as the only undefeated teams in NFL history. At the age of 38, quarterback John Elway was still playing like he was in his prime, and Terrell Davis was on his way to breaking the 2,000-rushing -yards barrier (the 4th in NFL history).

The '98 Broncos didn't break the '72 Dolphins' monopoly on perfect NFL seasons-they were upset by the New York Giants in Week 15-but they did repeat as Super Bowl Champions. Elway threw for 336 yards and won MVP honors in his final game, as Denver defeated the Atlanta Falcons in Super Bowl XXXIII.

America's Game features exclusive interviews with Elway, Shanahan, Smith and Howard Griffith (1997) and with Davis, Sharpe and Mark Schlereth (1998). Join NFL Films as they tell the stories of the '97 and '98 Broncos, who won back-to-back Super Bowls and sent their Hall-of-Fame quarterback out in style.