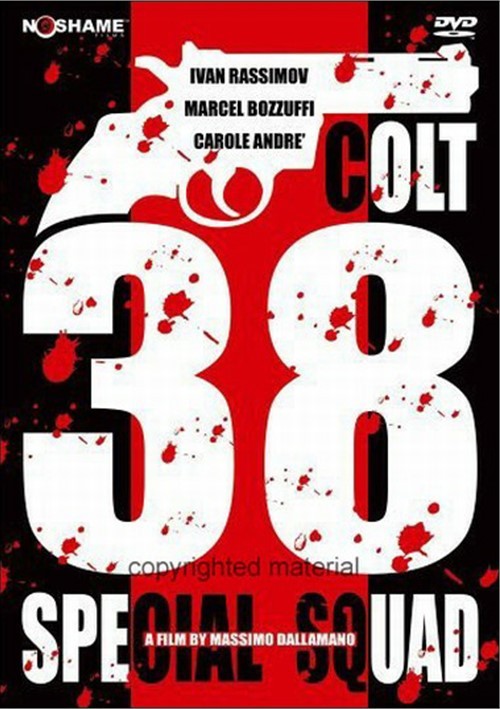 Two of the great all-time European badasses go mano a mano in this brutal crime thriller from Massimo Dallamano (What Have They Done To Your Daughters?). When his wife becomes the latest innocent victim of a merciless Marseilles crime lord (Ivan Rassimov, Your Vice Is A Locked Door And Only I Have The Key), police captain Vanni (The French Connection's Marcel Bozzuffi) goes beyond the law to form a secret squad of rogue cops, each armed with an unlicensed 38 Colt revolver. As Vanni and his vigilante crew take back the night bullet by bullet, the Marseillaise joins the game by instigating a wave of violent crime that turns the city into a war zone.

Released in Italy as Quelli della Calibro 38 (Those of the 38 Caliber), Colt 38 Special Squad was the last film directed by Massimo Dallamano and is a no-holds-barred poliziotteschi that's an absolute winner on all fronts: a great cast (Rassimov and Bozzuffi tear up the town in their only screen pairing), high octane action, unflinching violence and a rousing Euro-funk score from maestro Stelvio Cipriani (Death Walks On High Heels), plus a surprise guest appearance by Grace Jones!

No Shame Films is proud to present Colt 38 Special Squad for the first time on DVD, uncut and restored to its original aspect ratio. Included in this 2-disc special edition is La Bidonata (1978), the long-lost final film by giallo specialist Luciano Ercoli. Shelved after its producer was kidnapped in Italy, the film was never released anywhere in the world and is presented now for the first time by NoShame Films, culled from the original 35 mm negative!

Disc 2
Extra Feature: La Bidonata [a.k.a. The Rip-Off]
Back To Life - Interview with director of photography Sergio Dâ€™Offizi
Collectable Booklet with Liner Notes and Talent Bios