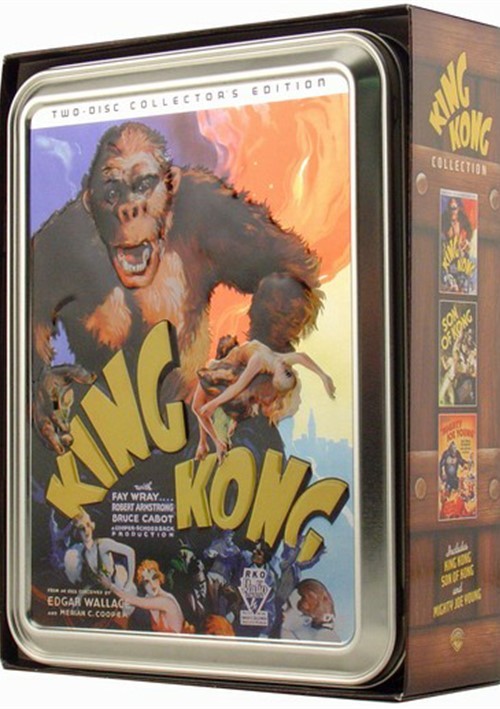 The legendary classic about a giant ape that is brought to New York City, and wreaks havoc! The Collector's Edition comes in an exclusive tin case and includes a reproduction of the original 1933 Souvenir Program, King Kong Postcards and a vintage King Kong Poster Mail-In Offer!

Carl Denham, the showman who brought Kong to New York, returns to Skull Island in search of a rumored treasure. He finds diamonds, all right. And something even more remarkable - Kong's son, a spunky 12-footer with a winning personality and his dad's awesome strength. The filmmakers who created King Kong kept the king-sized excitement going with this sequel, released the same year as the original. Robert Armstrong reprises the role of Denham, paired with a new damsel in distress, played by Helen Mack. The two rescue Kong Jr. from a quicksand pit and get in return a devoted protector who defends them from fierce prehistoric monsters, including a giant cave bear. But when a mighty earthquake strikes Skull Island, even the son of Kong may not be powerful enough to save them.

Lightning struck again when the team behind King Kong reunited to create another towering ape: Mr. Joseph Young. This time the simian is shorter and the jokes tongue-in-cheekier, but the OscarÂ®-winning Best Special Effects are just as Kong-sized. A slick nightclub owner (King Kong veteran Robert Armstrong) discovers the giant ape frolicking in Africa as the beloved pet of a young girl (Terry Moore). He brings both to Hollywood as a floor-show sensation, until some no-goods ply Joe with booze and the blitzed behemoth goes bonkers. Highlights such as Armstrong's henchmen trying to lasso Joe cowpoke style, Joe playing tug-of-war with musclemen and plenty of Joe-to-the-rescue action make Mighty Joe Young mighty fine entertainment.