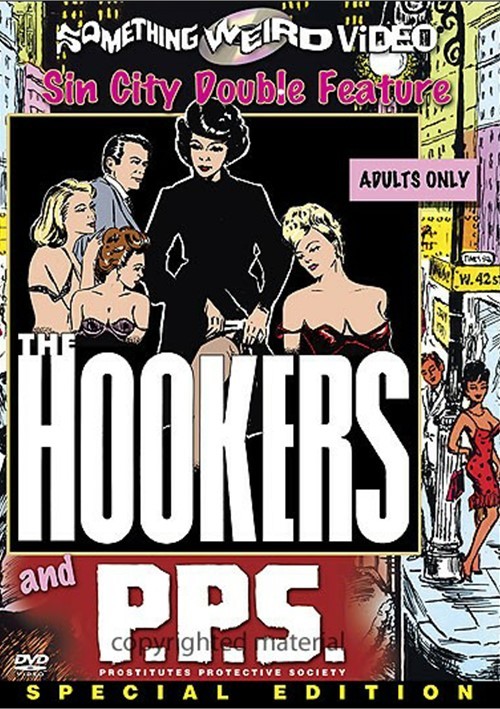 All the Lovin' Money Can Buy!

"The varieties of 'Scarlet Ladies' are infinite. Sometimes it's the good girl gone wrong, sometimes it's the smart one who's just a little too smart..." Or sometimes it's someone like Callie Sue, a pretty black secretary who sells herself to a white co-worker after remembering a violent assault by redneck racists. Or go-go girl Julie, whose manager sets her up with a perverted "producer" she's supposed to "be nice" to. Or Barbara, a suburban housewife who owes money to a loan shark and tries to take it out in trade. They're just three of The Hookers who stalk the Big City in this sordid slice of '60s sexploitation with giant hairdos, creepy lechers, and a crew member's head in a mirror!

Plus: It's hookers vs. hoodlums when the mob tries to muscle in on Madame Sue and her Times Square Street Walkers. So successful is Sue's operation that mobster Carny Bill declares war, and his men start shooting, stabbing, and hanging whores until the girls from the P.P.S. (that's Prostitutes Protective Society) and fight back with their own brand of shooting, stabbing, and laundry-room drowning in this gloriously insane New York nudie from Barry Mahon (The Beast That Killed Women). But remember: "You can't trick a hooker!"Â

Digitally Re-mastered!
Original Theatrical Trailer
Bonus Hooker-Happy Trailer for: All My Men, Hot Skin and Cold Crash, The House of Cats, Meeting on 69th Street, Obscene House, The Wild and the Wicked and Women of Desire!
Gallery of Sexploitation Ad Art with Exploitation Audio!

Meeting On 69th Street
Fresh from getting arrested in Florida, Sylvia, Dawn and Lana end up on Staten Island where they turn a dilapidated two-story flat into a Brand-New Whorehouse just in time to celebrate Opening Night with Three Sailors in the 1969 Mini-Feature: Meeting On 69th Street