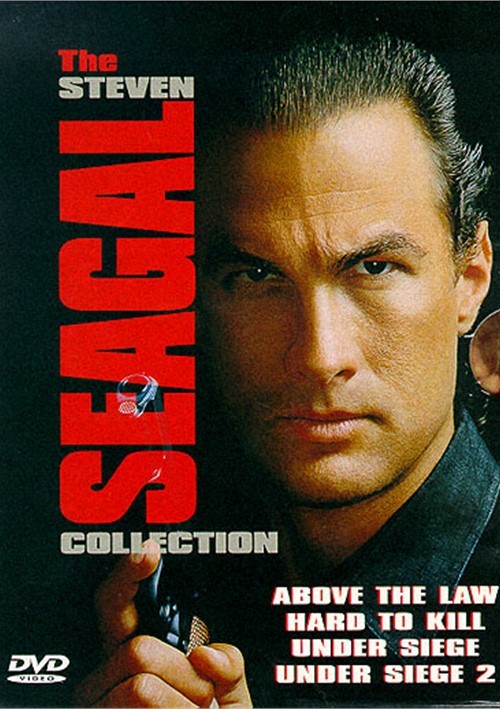 Chicago cop Nico Toscani (Steven Seagal) is on to something big. Suspects collared in a drug raid are allowed to walk. And Nico himself is asked to turn in his badge. He may be off the f-rce-but not out of the action. Steven Seagal makes his sensational screen debut as Nico in Above The Law, smashing his way into the top ranks of action stars as he tracks ex-CIA operatives trafficking drugs...and plotting a political assassination. Director Andrew Davis (The Fugitive) unleashes the fury all over the Windy City as Nico and partner Jax (Pam Grier) close in on a psychotic crimelord (Henry Silva).

A corrupt California politician and his hitmen have gunned down Los Angeles detective Mason Storm and left him for dead. But they'll find out the hard way. Storm is Hard To Kill. Steven Seagal is "the suavest inheritor of the action film mantle," Janet Maslin, The New York Times, in this thriller twice as popular at the box office as his debut film Above The Law. For seven years, Storm's been in a coma care unit. Now he's awake with one goal: revenge. Aided by a devoted nurse (Kelly Le Brock), he retrains to unleash his monumental martial arts skills with full fury. Hard To Kill is hard to beat excitement.

When the USS Missouri welcomes aboard entertainers for the battleship's last voyage, the visitors throw a party. A war party. Led by a rogue CIA operative and a turncoat officer, they're killer-elite commandos out to hijack the ship's nuclear arsenal. They overpower the crew. Except one man. Casey Ryback is an ex-Navy SEAL and decorated combat operative. All hands on deck, action fans!

A renegade electronics wiz has seized the sleek Grand Continental passenger train, transforming it into a rolling command unit for an awesome weapons satellite. But the one passenger who eludes capture is Ryback. The train is now a battleground, the satellite is locked onto its target and an oncoming freight train hauling gasoline is headed toward the Grand Continental. Can Ryback thwart the siege in time?