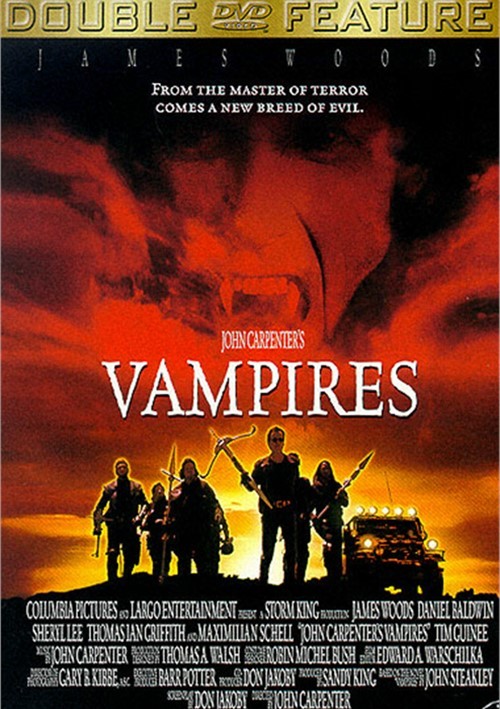 The blood confrontation of the ages is about to begin. In the blood-chilling tradition of Halloween and Village Of The Damned comes John Carpenter's unique vision of the ultimate killing machines, Vampires.

"Forget everything you've ever heard about vampires," warns Jack Crow (Woods), the leader of Team Crow, a relentless group of mercenary vampire slayers. When Master Vampire Valek (Griffith) decimates Jack's entire team, Crow and the sole team survivor, Montoya (Baldwin), set out in pursuit. Breaking all the rules, Crow and Montoya take one of Valek's victims hostage. The beautiful but unlucky prostitute (Lee) is their sole psychic link to Valek, and through her senses they will track down the leader of the undead. As Valek nears the climax of his 600-year search for the Berziers cross, Jack and the new Team Crow do everything humanly possible to prevent him from possessing the only thing that can grant him and all vampires the omnipotent power to walk in the daylight.

Robert De Niro, Kenneth Branagh, Tom Hulce, Helena Bonham Carter, Aidan Quinn, Ian Holm and John Cleese star in Branagh's acclaimed adaptation of Mary Shelley's Frankenstein. True to the original, here is the story of a young doctor whose obsession with death leads him to create life. But his "creature," crafted from the bodies of convicts and the brain of a brilliant scientist, is a hideous mockery of humanity. And when the creature realizes he will never be accepted by men, he seeks revenge on Dr. Frankenstein and his family. An inspired adaptation that's emotionally complex and truly terrifying, Mary Shelley's Frankenstein is "100% pure excitement. Visually stunning and refreshingly different" (Paul Wunder, WBAI Radio