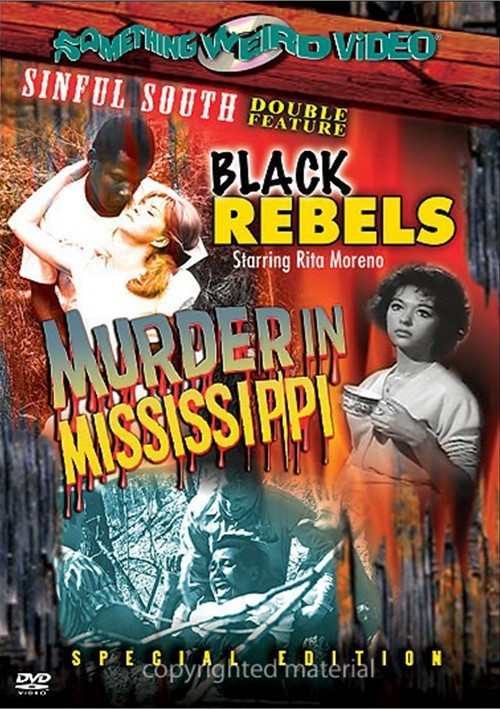 When drug-dealing Buck kills the boyfriend of Lola Montalvo (West Side Story Oscar winner Rita Moreno) then pins the rap on her brother, Lola seeks revenge by pretending to love Buck - moments after Buck's former girlfriend (Dyan Cannon!) tries to stick a switchblade in his back! All of which culminates in a race riot at the home of a high-school rich kid involving black, white, and Mexican gangs, undercover cops, Lola's poor ol' papa, and even a pool full of naked girls. Originally released as This Rebel Breed, producer William Rowland revamped this racially-charged teensploitation classic by adding nudie sex scenes and re-releasing it on the exploitation circuit as Lola's Mistake, Three Shades of Love, and Black Rebels!

Voter registration leads to Murder in Mississippi when a "cracker" Sheriff arrests white dilettante Carol Byrd and two other "Communist Yankees" for "agitating colored folks." Though her friends are killed, Carol is kept alive as the personal sex slave of two white-trash cretins in this nasty lesson in racial intolerance from the director of Olga's House of Shame. The 1964 murders of three civil-rights workers so appalled the nation that Hollywood waited 24 years before tackling the subject with 1988's Mississippi Burning. Not so with this eager-to-offend exploitation gem, loosely based on the killings and geared for the grindhouse crowd, which remains profoundly disturbing today.

Theatrical Trailer for Black Rebels under the alternate title Lola's Mistake!
Bonus Racially-Tense Trailers for The Color of Her Skin, Free White and 21, High Yellow, The Hookers, and My Baby Is Black!
Extra: Learn how to turn a cabin into "a home to be proud of with a few cents worth of whitewash" in the 1937 U.S. Department of Agriculture short The Negro Farmer!
Gallery of Drive-In Exploitation Art with Audio Oddities!