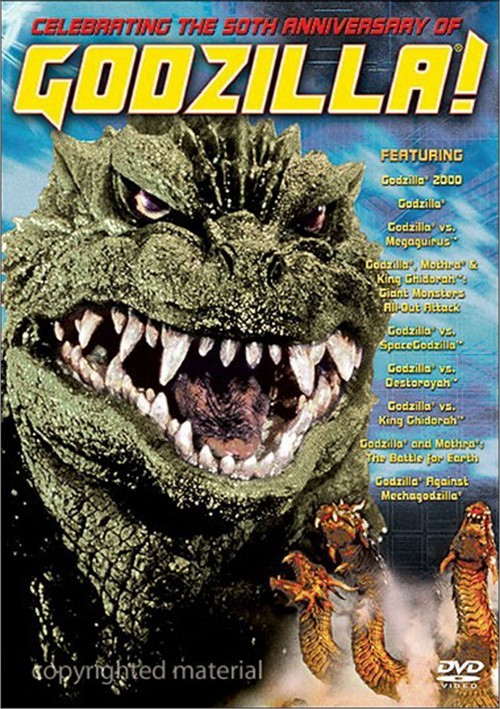 Get Ready To Crumble! GodzillaÂ® is back with a brand-new look and deadly atomic powers to battle the mysterious Orga over the streets of Shinjuku! Produced in Japan by the legendary Toho Company.

The enormous monster descends upon New York, and it's up to the Army and an odd team of investigators to unravel the mystery behind the incredible creature before it's too late.

Japanese scientists have created the world's first manmade black hole, which will trap Godzilla for eternity! Testing of this new Dimension Tide gives birth to giant dragonfly monsters called Meganula. From the sky down to the depths of a city's underground sewer tunnels, Megaguirus, Godzilla and mankind battle for supremacy.

When explorers attempt to bring Mothra's egg to the mainland form the mysterious Infant Island, Godzilla is awakened, causing the egg to hatch and triggering battle between the foes.

A radioactive Godzilla emerges from his own ashes to face the deadliest challenge yet: Destroyah!

With U.F.O.'s flying over Tokyo and the appearance of Godzilla's arch rival, the flying three-headed King Ghidorah, Godzilla wages a solo battle against the evil f-rces threatening Tokyo.

When mere military might can not squash Godzilla, a mystic man awakens the Holy Beasts of Yamato - King Ghidorah, Mothra and Baragon, sl--ping giants that protected Japan in ancient times. These untamed mammoth beasts take on Godzilla with frightening supernatural brute power that has been 2,000 years in the making.

A new invincible robot, Mechagodzilla, has now reached completion, armed with various weapons, including the most powerful gun in history that can destroy anything in the world. The battle of the century is going to take place between Godzilla and Mechagodzilla!