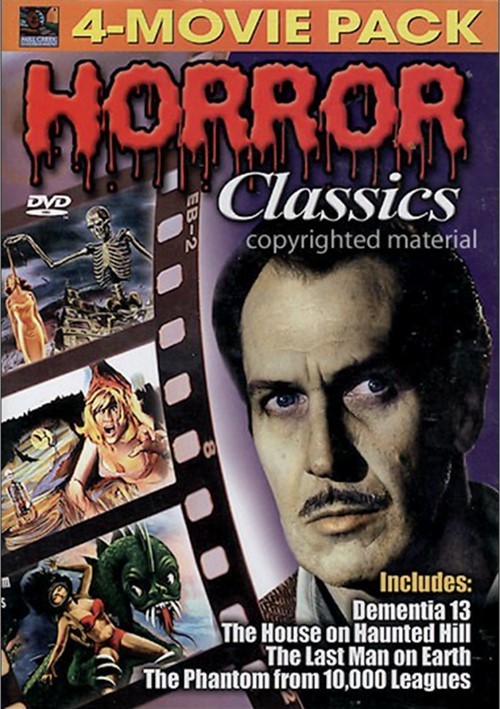 Long before The Godfather saga, a youthful Francis Coppola traveled to Ireland to film this dark and eerie production under the guidance of horror maestro Roger Corman. As was common in Corman productions, the movie utilized the same sets used by a production that had already wrapped. Meet the Halorans, the emerald isle's most tragic family, living in misery in a creepy dark castle. Lady Haloran s herself endlessly over the drowning death of her daughter seven years before, morbidly visiting her grave on a daily basis.

~~The Last Man on Earth

Based on a chilling Richard Matheson science fiction classic I Am A Legend, and later remade as The Omega Man starring Charlton Heston, this classic features Vincent Price as scientist Robert Morgan in a post apocalyptic nightmare. The world has been consumed by a ravenous plague that has transformed humanity into a race of bloodthirsty vampires. Only Morgan proves immune, and becomes the solitary vampire hunter.

~~The House on Haunted Hill

A perennial favorite of the "Shock Theatre" TV circuit, this film stars Vincent Price as a sinister gent (you're surprised?) who owns a sinister mansion on a sinister hill. He offers several of his enemies $10,000 each, if they agree to spend the night in the crumbling old mansion. Price festively gives each of his guests a tiny coffin containing a handgun, then he proceeds to set in motion any number of gadgets and devices designed to frighten the guests into using their weapons.

An absolute classic filled with great cheesy special effects. At the bottom of the ocean a mysterious radioactive rock percolates a stew of mutation that produces a hideous monster from the depths. The government sends an agent and a scientist to investigate when horribly burned, radioactive bodies begin to pop to the ocean's surface. Starring Kent Taylor.