Sin Syndicate, The / Sin Magazine / She Came On The Bus 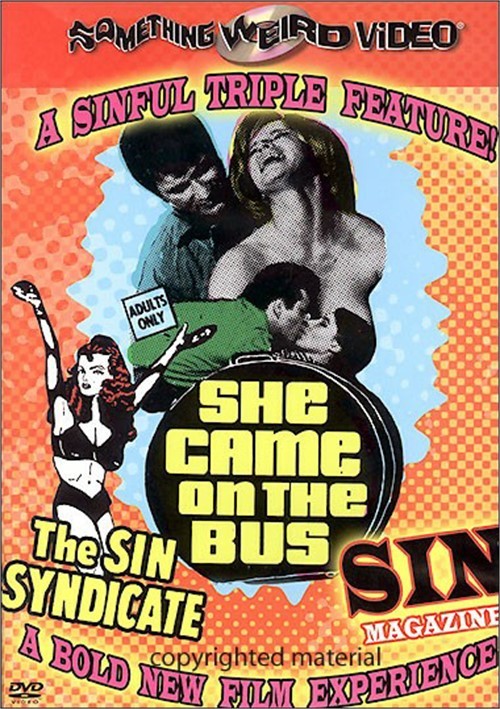 Dolores started as a dancer in Havana, Lorna was a stripper, and Judy was just looking for fun. Instead, they became "Zero Girls" - hookers for the mob and controlled by The Sin Syndicate!> "Handpicked, attractive, and young," they're beaten if they get out of line, d if they try to escape. Shacked up in Zero House, they spend their days as "party girls" for perverts in this nasty nudie from director Michael Findlay (The Touch of Her Flesh), which also manages to include footage of the Cuban Revolution, the London blitz, and the bombing of a battleship!

Plus: Three brothers, an alcoholic wife, and a European bride all shack up in a New England farmhouse to publish Sin Magazine and "move into a new world of sex, violence, and perversion." But as the magazine gets sleazier, mentally unstable older brother Ross starts to crack which, you guessed it, leads to murder...Want to publish a dirty magazine? Do it and die!

And: After breaking into a suburban home and assaulting both the housewife and a door-to-door saleswoman, a gang of degenerate "thrill seekers" commandeers a bus, picks up two unwitting female passengers for sport, and continues their twisted "fun and games" on the road in the mind-melting She Came On The Bus, one of the slimiest gems of ultra-sleaze and anarchy ever to assault audiences!

Original Theatrical Trailers for The Sin Syndicate and She Came On The Bus!
Bonus Twisted Trailers for: All Women, Fluctuations, Infidelity American Style, Satan's Bed, and Submission!
Gallery of Sexploitation Ad Art with Exploitation Audio!