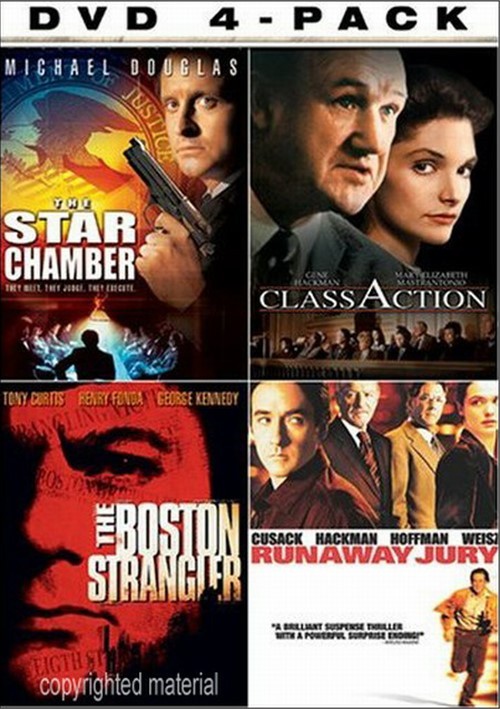 In this electrifying drama, Steve Hardin (Michael Douglas), a young judge, must grapple with his conscience as vicious criminals in his court are going free as a result of slick lawyers finding obscure loopholes in the law. Hardin feels utterly powerless until he discovers The Star Chamber, a small group of powerful men bent on their own kind of vigilante justice. Meeting behind closed doors in the utmost secrecy, they decree their own punishment for the guilty who have slipped through the system without paying for their crimes. Co-starring Hal Holbrook, The Star Chamber is a powerful drama and spellbinding entertainment - a thriller as urgent and relevant as today's headlines.

Taut and emotionally powerful, Michael Apted's compelling showdown courtroom drama is driven by characters as intriguing as its predicament. The only thing Jedediah Tucker Ward (Gene Hackman) and his daughter (Mary Elizabeth Mastrantonio) have in common is law. Equally brilliant, equally driven, the two find their longtime personal battle takes a new form when they represent opposing sides in a corporate class action lawsuit. A suspense-filled trial pits father against daughter, justice against victory.

One by one, the victims fell, each death more gruesome than the last. The actual murders that rocked Boston in the '60s are the gripping subject matter of this unforgettable police thriller. Henry Fonda stars as the investigating police detective. Tony Curtis delivers a stunning performance as the psychopath Fonda must conquer. Filmed in a documentary style that makes the horrifying events all the more real, The Boston Strangler is one of the most powerful films in its genre.

From master storyteller John Grisham and the director of Don't Say A Word comes a taut suspense-thriller that "grabs hold of you and never lets go" (Philadelphia Metro).

In their first film together, screen legends Gene Hackman and Dustin Hoffman face off in this electrifying nail-biter about a ruthless jury consultant who'll do anything to win. With lives and millions of dollars at stake, the fixer plays a deadly cat-and-mouse game with a jury member (John Cusack) and a mysterious woman (Rachel Weisz) who offer to "deliver" the verdict to the highest bidder. Packed with danger, intrigue and pulse-pounding twists and turns, Runaway Jury rules!

Reviews for "Courtroom 4 Pack, The"