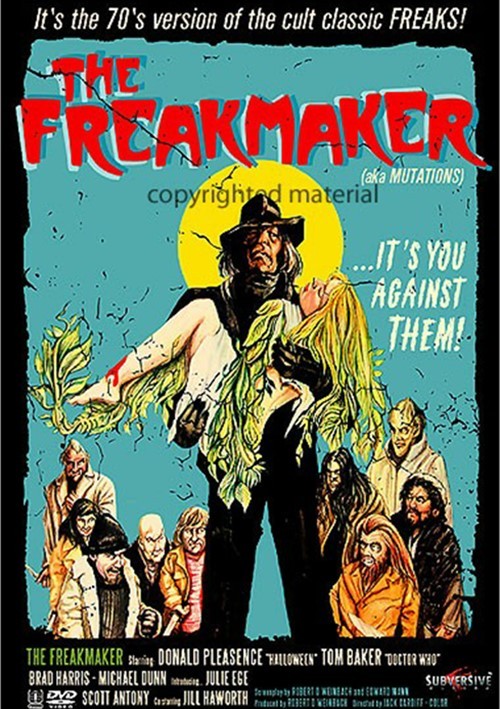 "The Freakmaker (aka The Mutations), stars Donald Pleasence as Professor Nolter, a college science professor who believes it is man's destiny to survive an uncertain future by evolving into a hybrid plant/human mutation. To test his theories, Nolter supervises the abduction of young co-eds and fuses them with mutant plants he has developed in his lab. The rejects are sent to a neighboring freak show run by Mr. Lynch (Dr. Who's Tom Baker), known as "The Ugliest Man Alive," who has been promised a reversal of his deformity by Nolter as a reward for his devotion. Lynch's self-hatred and his wretched belief in Nolter's empty promises turn him against his sideshow "family" - the Alligator Lady, the Frog Boy, the Human Pretzel, the Monkey Woman, the Human Pincushion and the unforgettable "Popeye". Lynch makes the mistake of voicing his revulsion to the only people in the world who regard him as "one of us"...

Unavailable on video since the 1980s, this Frankensteinian twist on Tod Browning's classic Freaks also features such cult favorites as Julie Ege (Legend of The 7 Golden Vampires), Brad Harris (Samson, Commissar X), Jill Haworth (Exodus), and the extraordinary Michael Dunn (Wild Wild West's "Dr. Loveless") in one of his final film roles. With its humanistic treatment of a cast of "human oddities", bizarre makeup effects, and one of the most avant-garde music scores ever to grace a horror film, The Freakmaker is a hot house of horror that will raise hackles of terror up your spine!"