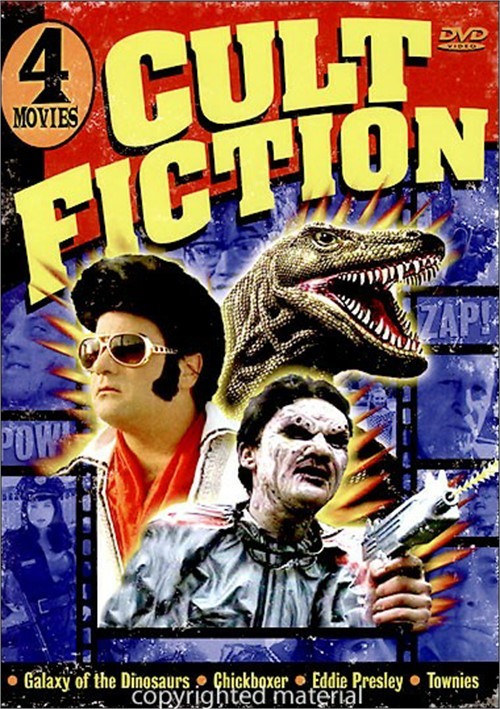 Ariauna Albright and Lilith Stabs. For anyone who's ever watched a movie so bad you wished acting required a permit or that a 14-day waiting period was mandatory to buy a camera...the Bad Movie Police are here! Follow the adventures of Sgt. Elke Mantooth, Lt. Drucilla Dread and The BMP Task F-rce as they seek out the worst "cine-terrorists" in movie history and bring their crimes to justice for your entertainment! The first Bad Movie Police case is a little gem from 1992 called Galaxy of the Dinosaurs. Its claim to fame is director Lance Randas' gross misuse of stock footage from Planet of the Dinosaurs, intercut with thrift store footage shot in the woods behind the director's father's house!

Ariauna Albright and Lilith Stabs. Shot in late 1991, Chickboxer has a long list of crimes it's committed against good cinema. Among them is a cameo by retired scream queen Michelle Bauer (Hollywood Chainsaw Hookers) shot in LA while the rest of this turkey was lensed in the backwoods of Ohio under the dubious talents of feminist director Yolanda Squatpump. Watch for Bauer's steamy scene in the flick's finale which was obviously tacked on to an otherwise skinless cheesefest! Out of Sight and Soldier star James Black is also on board for this comedic misstep in cinematic sludge!

Duane Whitaker, Stacie Bourgeois, Clu Gulager, and special appearances by Quentin Tarantino and Bruce Campbell. Eddie Presley is a down-on-his-luck ex-Elvis impersonator. With his days of former glory performing in small to medium-sized clubs behind him, he's stuck in a dead-end security job, making barely enough to live out of his van. But Eddie's luck is about to change when he's offered a comeback gig at a seedy Hollywood nightclub - until he has a breakdown on stage and gives the audience a powerful, improvised performance they'll not soon forget. Based on the stage play by Duane Whitaker (From Dust 'Til Dawn 2), Eddie Presley is a bittersweet drama in the tradition of The King of Comedy and Ed Wood, with plenty of satirical jabs at politics and life at the bottom of the entertainment food chain.

Toby Radloff, Lori Scarlett, Shane Koltnow, Michelle Sibits, Jay Geldhof and P. Craig Russell. Welcome to Schlarb, Ohio...a small town overrun by misfits, freaks and weirdos! Dickie (Toby Radloff, Killer Nerd) is a lonely dumpster-diver who finds companionship in his latest discovery...a young woman's corpse! Pricey (Lori Scarlett, Ozone) is a mute girl with a lookalike baby-doll. When she loses her doll after an unsavory encounter, she replaces it with the next best thing - her neighbor's young son! Meanwhile, the enigmatic Caduceus sets out to cleanse a nasty high school girl of her wicked ways. Scenes to follow include necrophilia, marijuana-smoking lesbians, the sexual assault of a mentally-challenged girl and a dinner plate of skinned and cooked squirrels - not for the weak! A "Magnum Opus of CineTrash" from cult filmmaker Wayne Alan Harold (Killer Nerd, Girlfriends)!