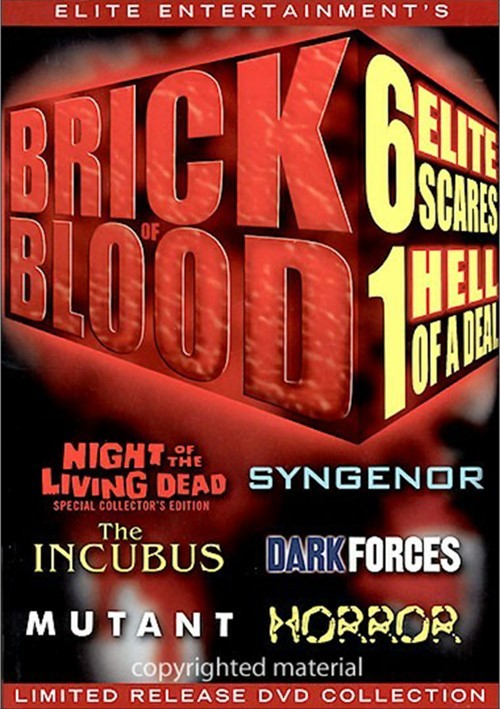 Dead bodies are returning to life and eating human flesh! A group of survivors seeks refuge in a farmhouse, hoping to protect themselves from the hordes of advancing zombies. Trapped and alone, they fight for their lives...hoping this horrible nightmare will come to an end. Who will survive the Night of the Living Dead? (Collector's Edition)

The summer peacefulness of the New England community of Galen is suddenly shattered by a series of murders. Dr. Sam Cordell (John Cassavetes), a newly arrived surgeon and pathologist, tries to help veteran police chief Hank Walden (John Ireland) investigate the baffling crimes. Jenny, Dr. Cordell's daughter, tells her father about the terrible recurring nightmares suffered by her boyfriend, Tim Galen, which seem to coincide with the slayings. At the town museum, scene of one of the murders, Dr. Cordell finds an ancient book that tells of Incubus, a demon of many forms that ravishes women in their nightmares. He also learns that Incubus and Succubus, a demon that appears to men, can be sexually interchangeable.

In the film's shocking and terrifying climax, Dr. Cordell monitors Tim's nightmare, taking him through to the awful realization of what the Incubus is and who it is in human form.

While on vacation, two brothers discover a small town's hideous secret. A nearby chemical plant has been dumping toxic waste just outside of town, turning the townspeople into contaminated, mutant zombies. Now, there's nowhere to run as the growing army of blood thirsty ghouls take over the town and devour the remaining humans, one by one.

Norton Cyberdyne, a multinational corporation which produces military defense technology, has created a SYNthesized GENetic ORganism - SYNGENOR. A "Super-Soldier." The perfect killing machine. There's just one problem - a prototype creature has gotten loose and has begun a bloody killing spree. Paula Gorski (Riva Spier), a beautiful but undermining executive, decides to allow the SYNGENOR to wreak more terror. She sees this as an opportunity to let C.E.O. Carter Brown (Re-Animator's David Gale) take the fall for the disaster. Meanwhile, down in the basement of the building, a horde of newly spawned SYNGENORs have emerged. An ensuing battle rages against the creatures as the humans try by any means necessary to keep the creatures contained within the building.

Considered by many to be the "lost David Gale film," SYNGENOR features special visual effects from Robert and Dennis Skoatak, creators of visual effects for Aliens and The Abyss and features Creature Design by William Malone (House on Haunted Hill).

A modern-day politician is faced with an incomprehensible power in this startling, award-winning mystical-fantasy. Senator Rast is a very powerful man. But his power is nothing compared to the enigmatic stranger who mysteriously comes to "visit" him. Possessing uncanny magical prowess and miraculous psychic abilities, the peculiar, but seemingly benevolent visitor quickly gains a spellbinding hold over the senator and his family.

When the visitor becomes aware of the loveless union between the Rasts, he begins to use his powers to control the senator and win favor with his wife and son. Are these dark f-rces enough to bring down this powerful politician, or will the diabolical drifter meet an impending doom?

Five teens that escape from a drug rehabilitation center to cash in on a questionable promise of salvation from the psychopathic Reverend Salo, Jr. (Vincent Lamberti).

Reviews for "Brick Of Blood"