Bonanza: Tales From The Ponderosa 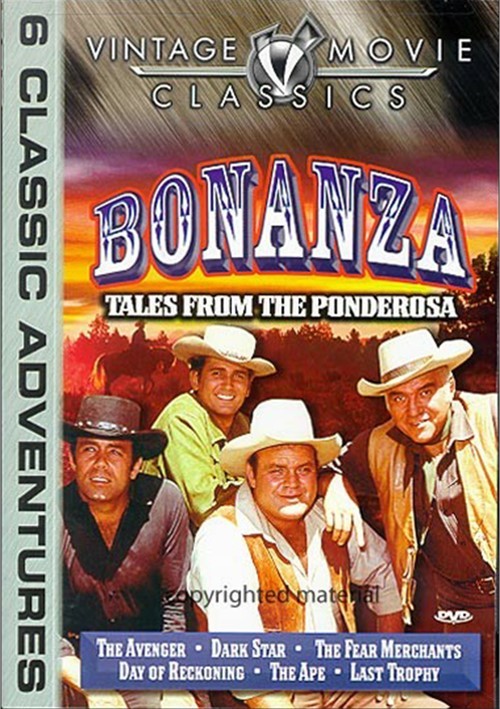 Adam and Ben are convicted of murder and sentenced to hang. While Hoss and Joe are trying to gather support for a stay of execution, a mysterious strangers arrives and the boys don't know whether he will help or hinder their case. Starring Vic Morrow, Jean Allison, and Ian Wolfe.

Little Joe falls in love with ostracized gypsy girl Tirza. It turns out she was cast out because her people believe she is a witch! Starring Susan Harrison, Hugo Haas and Arthur Batanides.

The Cartwrights must protect a young Chinese man in Virginia City, who has been accused of murder. Andy Fulmer, who is running for mayor, uses the situation to further his election bid. Starring Gene Evans, Christopher Dark and Guy Lee.

When Matsou, an outcast Indian, saves Ben's life Ben gives Matsou some land and a new start in life. Unfortunately neighbor Ike Dagget hates Indians and Matsou's own brother has his own ideas of what Matsou should be doing. Starring Ricardo Montalban, Madlyn Rhue, and Karl Swenson.

When Hoss becomes friends with a man his own size, trouble ensues because Arnie doesn't know his own strength and has no control over his anger. Starring Cal Bolder, Leonard Nimoy, and Karen Sharpe.

Lord and Lady Dunsford visit the Ponderosa, and Adam arranges a hunting party. Lady Dunsford decides to come along. Lady Dunsford becomes disgusted with her husband's cowardice and begins aiming her affections at Adam. Starring Edward Ashley and Hazel Court.

Review "Bonanza: Tales From The Ponder"

Reviews for "Bonanza: Tales From The Ponder"