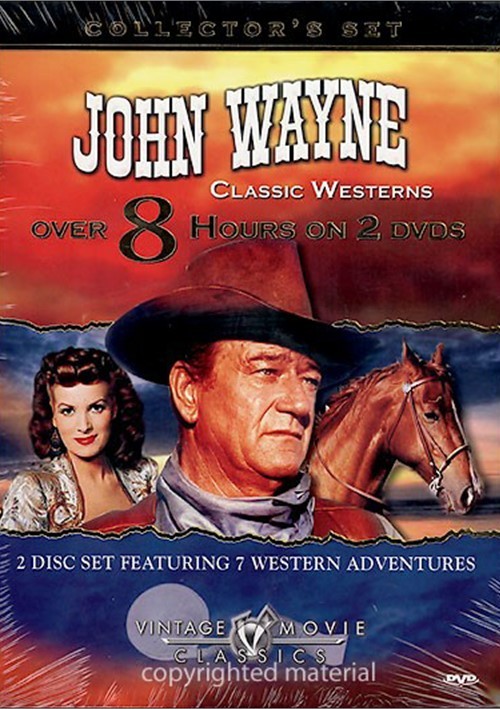 KING OF THE WEST

Angel and the Badman

When gunslinger Quirt Evans (John Wayne) is wounded during a shootout, a Quaker family takes him in. While recuperating he falls for their daughter Penelope (Gail Russell) and begins self-transformation. Struggling with his desire to kill Laredo Stevens (Bruce Cabot) for murdering his foster father and trying to avoid the relentless Marshal McLintock (Harry Carey), Quirt must decide what is truly important to him.

Winds of the Wasteland

Unemployed Pony Express riders John Blair (John Wayne) and Larry Adams (Lane Chandler) purchase the Crescent City coach line to Buchanan Coty from Cal Drake (Douglas Cosgrove). When they arrive there they find they have been duped with a line to a ghost town. Despite this, the two set the stage line running. On his first run Blair rescues a telegraph crew that had been poisoned. They gratefully agree to run the telegraph line through Crescent City, revitalizing the town, if he can find them laborers. This begins a fierce competition between Blair and Drake, who had been relying on that line coming through his own town.

George Washington McLintock (John Wayne) has the largest ranch in the territory, which houses both mining and lumber interests. He should be one of the happiest men in the West, but that's far from the reality. His wife Katherine (Maureen O'Hara) left him and is on her way from the East to get a divorce and take their daughter Rebecca (Stephanie Powers) back with her. Government sponsored homesteaders that barely know what they're doing are on his land. A fool Indian agent (Strother Martin) working with a corrupt land agent (Gordon Jones) are moving some of his oldest friends and enemies to the reservation. On top of it all, determined ranch hand Devlin Warren (Patrick Wayne) wants to woo Rebecca before she leaves. All this builds into a comedy of epic proportions as McLintock tries to regain control of every element of his life.

Half-breed outlaw Zanti (Earl Dwire) kills John Tobin's (John Wayne) father, then attempts to kidnap Ruby (Sheila Terry) and kill her grandfather Dusty (George Hayes), but Tobin intervenes just in time to put a stop to it. The sheriff (Jack Rockwell) mistakes John for one of Zanti's outlaw gang members and accuses him of killing Dusty. Dusty is still very much alive, though. Tobin tracks Zanti into the desert, then goes after his entire gang.

U.S. Marshal John Travers (John Wayne) is hoping to catch an outlaw chieftain known only as "The Shadow." To do so he becomes sheriff of a town with numerous unsolved murders. He and his Indian friend Yak (Yakima Canutt) explore a tunnel leading from the sheriff's office to the outlaws' cave hideout where he discovers The Shadow's true identity and rescues Anita (Verna Hillie).

"The Wrecker" is attempting to sabotage the L & R Railroad to bolster an airline service. Commercial pilot Larry Baker (John Wayne) finds that his father, the railroad's chief engineer (J. Farrell MacDonald), has been murdered. "The Wrecker" is the culprit, but Larry's going to have a time tracking him through a bevy of suspects, especially since the culprit is a master of disguise.

Rod Drew (John Wayne) is reacquainted with his old Wabi (Noah Beery Jr.), who is a 'half-breed' framed for the shooting murder of a card shark. Rod rescues him and the two friends find their way to the Wabinosh General Store. There they find a map leading to the mysterious Ball family and a fortune in gold. LaRocque (Robert Frazer), also wants the map, and captures the Mountie sent to bring Wabi in. Dressing one of his henchmen in the Mountie's clothing, LaRocque sends him after Drew and Wabi.