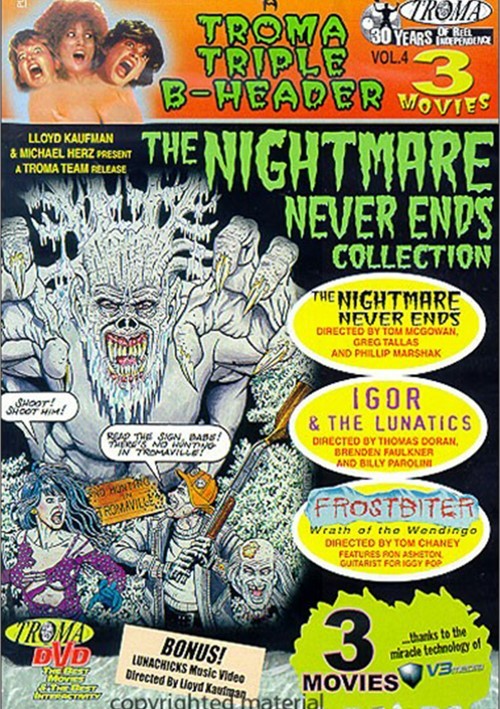 Charles Moll (A.K.A. Richard Moll), star of the hit 80's "Night Court," plays acclaimed author James Hanson who is trying to uncover the truth behind the belief in God and the Devil. Will James' effrontery to defy superstition put him and his devout Catholic wife in danger of losing their souls to one of the Devil's own henchmen?

Igor, a Charles Manson-like cult leader, and his deranged, sex-mad, murderous followers who were captured and sent to prison have made probation just 16 years after being detained. Enraged, this bunch is sure to raise hell and commence their plan for blood-spattered revenge. is anyone safe from the bloody wrath of Igor and the Lunatics?

Frostbiter: Wrath of the Wendigo is a chilling testament to the evil of the Wendigo, a deadly creature of the north. According to Native American lore, it will rise to strike terror in the hearts of those who desecrate its resting place! When Frostbiter arrives, Hell has frozen over!

Intro with Troma President and Creator of The Toxic AvengerÂ® Lloyd Kaufman
Lunachicks music video: "Say What You Mean", Directed by Lloyd Kaufman
Troma-tic trailers
"Parts of The Family"
"Tales From The Crapper"
TromaDance PSA
...and more!