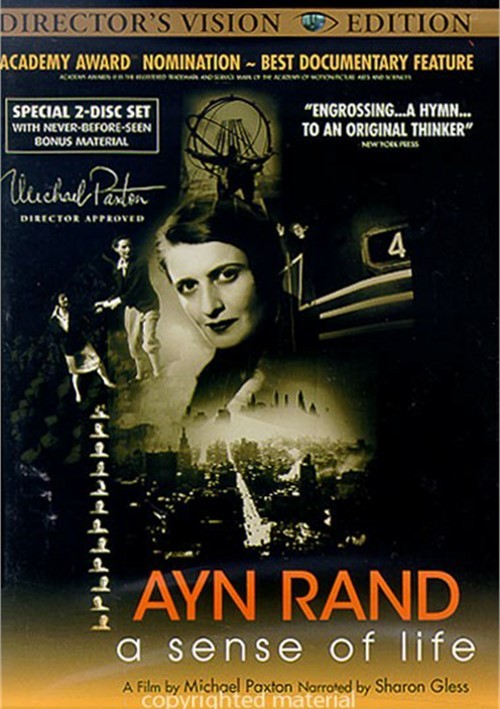 Ayn Rand: A Sense of Life is the first authorized film look at the life and work of the controversial Russian-born author. The writer of such renowned novels as "The Fountainhead" and "Atlas Shrugged" is now the subject of a virtual "...multimedia...Ayn Rand fest:," as reported by Newsweek. Written, produced and directed by Michael Paxton, Ayn Rand: Sense of Life is a flux of events, ideas, emotions and accomplishments - all combining to create a portrait of one woman's genius and point of view.

Narrated by Emmy Award-winning actress Sharon Gless, the documentary offers millions of fans the opportunity to relive the drama of Ayn Rand's life and fiction: from her early childhood and escape from Soviet Russia to her struggle and triumph as an American writer whose book sales exceed 500,000 copies annually after five decades in print. Drawing from personal papers and public archives across two continents, the film combines fact, fiction and an intimate weave of interviews with intellectual heir Leonard Peikoff, television journalist Mike Wallace, as well as rare photos, film footage and an original film-noir scene from her 1934 play, "Ideal".

the material captures Rand's life-long themes of reason, rational selfishness and political freedom. Ayn Rand: Sense of Life, sweeping from pre-Revolutionary Russia to contemporary America, tells the story of a "ferocious angel," a woman, and thinker who continues to incite the curiosity and passion of millions.

Reviews for "Ayn Rand: A Sense Of Life - Di"