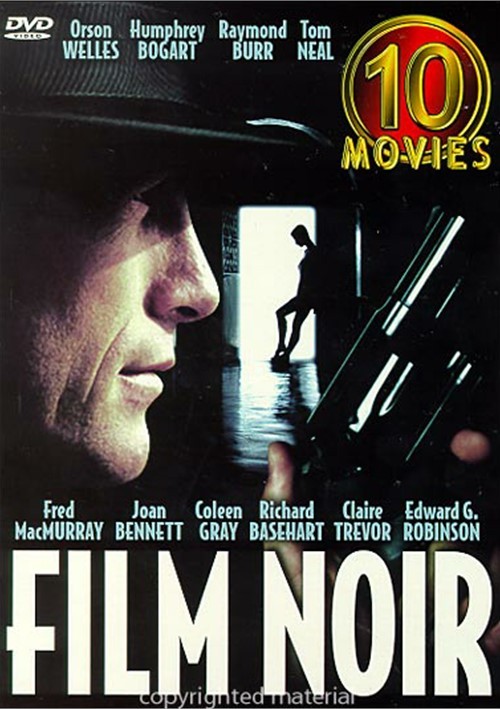 Americans Johnny Macklin (Fred MacMurray) and Madeleine Haley (Claire Trevor) enter the scene and find themselves embroiled in the illicit activities. Both are government agents, but each one thinks the other is a crook. The real bad guy is Pete Richie (Raymond Burr), head of the smuggling ring. At one point, Macklin and Haley must pretend to be husband and wife.

He Walked By Night

Davis Morgan (Richard Basehart) is a clever but psychopathic burglar (based on real-life criminal Erwin Walker). Basehart stays one step ahead of the law by listening in to the police band on his radio. To avoid detection, he changes his M.O. on each crime, making it seem that the string of burglaries is the work of several thieves. But Basehart trips himself up when he kills a cop.

Jury foreman Edward Weldon (O.P. Heggie), has no qualms about sentencing a woman to death for a crime of passion. He sticks to his firm belief until his own daughter Stella (Sidney Fox) kills a former lover who betrayed her. Humphrey Bogart plays a small but memorable role as one of the murder victims in this New York-filmed oddity.

Edward G. Robinson plays Pete Morgan, a farmer who harbors dark secrets and refuses to let anyone near the red house in the woods behind the house. When they hire adopted daughter Meg's friend Nath Storm (Lon McCallister) to help out on the farm, the two kids start to wonder about the mysterious red house.

Small-town accountant Frank Bigelow (Edmund O'Brien) goes to San Francisco for a week's fun prior to settling down with fiance Paula (Pamela Britton). After a night on the town, he wakes up with more than just a hangover: doctors tell him he's been given a "luminous toxin" with no antidote, and has, at most, a week to live!

Joe Rolfe (John Payne) is an ex-con who just cannot seem to get a break. Rolfe is picked up on suspicion of participating in a robbery master-minded by former Kansas City cop Timothy Foster (Preston S. Foster). On the run from the law, Rolfe assumes the identity of a dead crook. In this guise, he insinuates himself into Foster's gang.

Al Roberts (Tom Neal) decides to start a journey hitchhiking westward to visit his girlfriend. Roberts accepts a ride from affable gambler Charles Haskell Jr., who suffers a total heart attack while driving. Roberts, afraid that he'll be accused of murder, disposes of the body, takes the man's clothes and wallet, and begins driving the car himself. Vera (Ann Savage) a hitchhiking girl Al picks up, sees through him and starts blackmailing him into going along with her schemes which gets him deeper and deeper into trouble.

Jeff Cohalan (Robert Young) is a successful architect tormented by the fact that his fiance was killed in a mysterious car accident on the night before their wedding. Enter Ellen (Betsy Drake), an independent and intelligent insurance investigator who just might be able to help Colahan figure out who or what is behind all of his misfortune.

Christopher Cross is a lonely painter married to a nagging wife, Adele (Rosalind Ivan). Cross meets Kitty and beings an affair with her. Behind his back, Kitty's other lover, con man Johnny Prince sells Cross's paintings claiming Kitty as the artist.