Hammer Collection. The: The Devil Rides Out/Rasputin, The Mad Monk 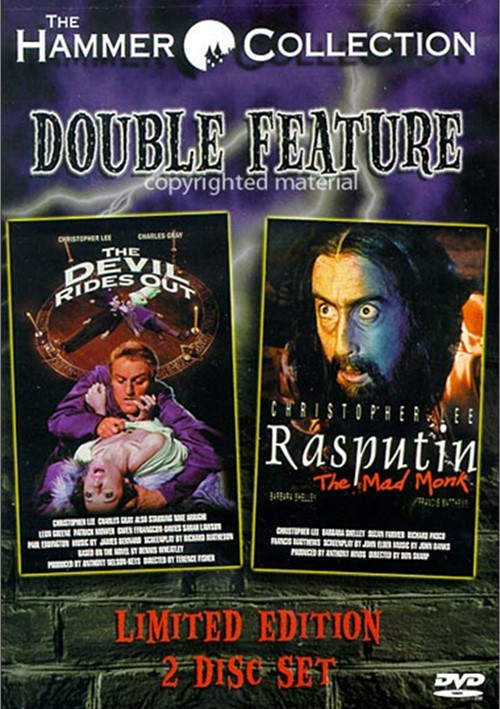 Hammer Collection. The: The Devil Rides Out/Rasputin, The Mad Monk

The Devil Rides Out

The Duc de Richleau (Christopher Lee) and Rex van Ryn (Leon Greene) are concerned when their young friend, Simon Aaron, is absent from their annual reunion. Upon visiting him, their suspicions are confirmed when they learn of Simon's new affiliation with a so-called "astrological society" headed by the malevolent Mocata (Charles Gray). Soon, the two men discover that Mocata's society is really a devil cult taking control of innocent people through spells and demonic ceremonies. The Duc realizes that Mocata wills top at nothing to maintain his satanic cult. The only hope lies in the success of a potent ritual that will challenge Mocata and destroy his coven forever.

Hammer Films' dual reputation for screen shock and flamboyant costume adventure meld in this tale of the real-life "holy-man" whose evil charm held the fate of an entire nation in its grip. In early 20th century Czarist Russia, Rasputin (Christopher Lee)j, a wild-eyed peasant monk, mysteriously demonstrates his healing powers by saving a woman's life and asking only for wine and Bacchanalian celebration in return. Soon Rasputin uses his evil charm and powers to become increasingly manipulative and violent. Ferocious, devious, sensuous and other-worldly, this uncouth peasant ingratiated himself into the lives of the sophisticated royal class. Christopher Lee's multi-layered performance as the monk rates as one of the best portrayals in any film.

Review "Hammer Collection. The: The De"

Reviews for "Hammer Collection. The: The De"