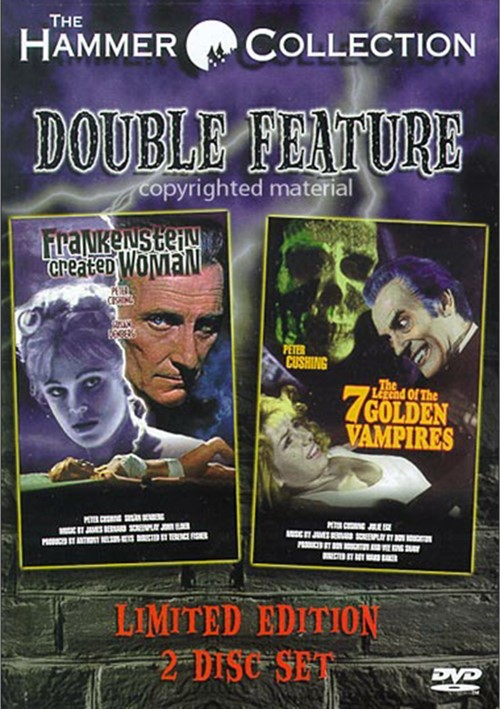 In a 19th century Balkan village, Baron Frankenstein (Peter Cushing) and Dr. Hertz (Thorley Walters) are embarking upon an experiment to capture the souls of the dead and impose them into other bodies. When their assistant, Hans (Robert Morris), is unjustly accused of murdering his girlfriend Christina's father and put to death, the two men claim his body and trap his soul in their laboratory. Meanwhile, Christina (Susan Denburg) is consumed with grief over the death of her beloved Hans and commits suicide.

Frankenstein and Dr. Hertz are able to revive Christina and transfer Hans' soul into her body which results in a vision of beauty. Their experiment appears successful until Frankenstein discovers that Christina's actions are being driven by the spirit of Hans and his passion for revenge...

Legend of the 7 Golden Vampires

Professor Van Helsing and Dracula meet again in this kung fu horror spectacular set in the village of Ping Kuei. After learning about the Seven Golden Vampires of the village, Hsi Ching, Vanessa Beren and Mai Kwei offer to guide Van Helsing and his son to Ping Kuei to free it from the curse of Count Dracula. Throughout their journey, the party encounters several unwanted attackers until they arrive at the golden vampires' derelict temple, inhabited by Count Dracula. It is here, in this eerie place, where Van Helsing and the Count begin a battle-to-the-death where good and evil collide, and only one man is left standing. This is Hammer's original uncut version. It was released in the U.S. in an eviscerated version as The Seven Brothers Meet Dracula which is also featured here.

Reviews for "Hammer Collection, The: Franke"