Hammer Collection, The: Quatermass And The Pit/Quatermass 2 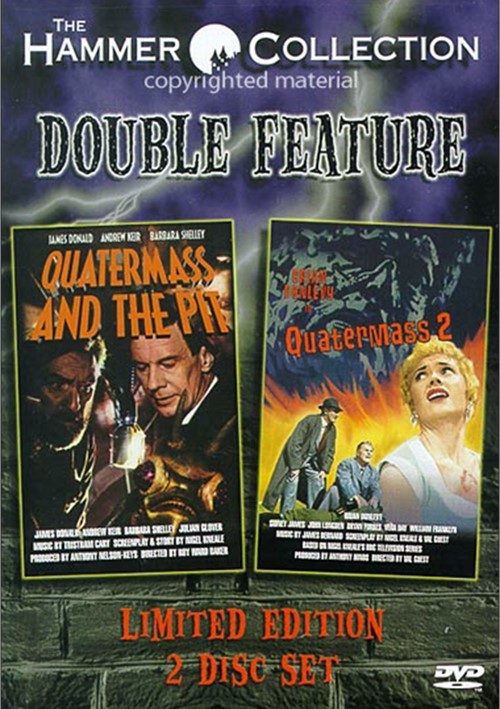 Quatermass and the Pit

The thriller that began five million years ago in another world has come to earth! A London subway excavation abruptly halts when construction workers find a cluster of prehistoric skulls and skeletons. Anthropologist Dr. Roney (James Donald), his assistant Barbara Judd (Barbara Shelley), and space expert Professor Quatermass (Andrew Keir) are driven by curiosity and dig deeper to discover a "strange" missile that is not of this earth. The eerie juxtaposition of locust, demon-like creatures and a high-tech rocket leads Rodney and Quatermass may owe his intellect and latent psychic powers to the intervention of insectoid creatures from Mars. Even more unsettling... the craft itself appears to still be alive!

During a routine drive to his observatory, Professor Quatermass (Brian Donlevey) stumbles upon a mysterious government facility surrounded by guards and mines. Curious of this unusual site, Quatermass begins to investigate and discovers a remarkably large number of meteors in the area. As his investigation comes to a turning point, Quatermass comes to a horrific conclusion: alien invaders. The ensuing danger could mean the end of human civilization! In an attempt to save the country and ultimately the world from the intruders, Quatermass must face the terrible dangers ahead and the disasters that follow them.

Reviews for "Hammer Collection, The: Quater"