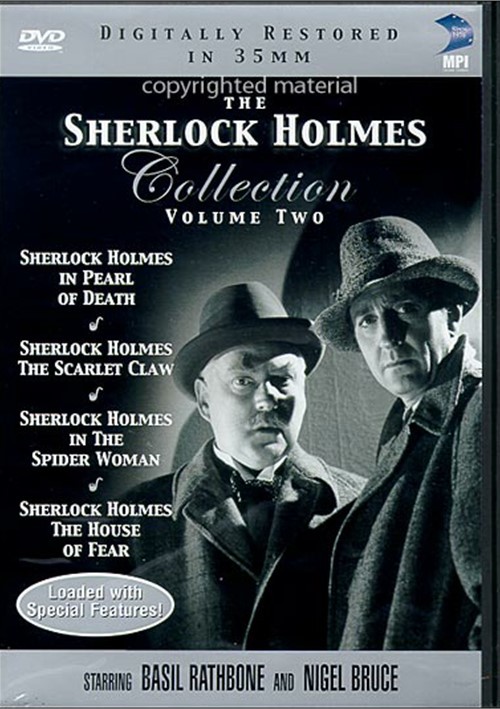 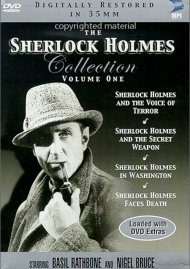 Sherlock Holmes Collection, The: Volume One 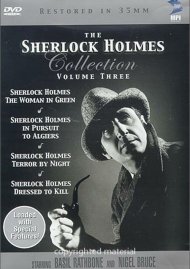 The master detective Sherlock Holmes (Basil Rathbone) and his faithful cohort Dr. Watson (Nigel Bruce) are back, preserved and digitally restored in 35mm to original condition by the UCLA Film and Television Archive. These newly restored versions of the classic films include the period war bond tag, studio logo and credits from its original theatrical release. Filled with ominous shadows and interesting camera angles, the visual beauty of the film in 35mm is stunning.

The master detective must solve a series of horrible murders involving busts of Napoleon and a missing gem that has caused murder and misfortune since the days of the Borgias.

Holmes and Watson journey to Canada to attend a meeting of the Royal Canadian Occult Society. Before long, they are investigating a series of gruesome murders that the locals attribute to a legendary phantom marsh monster.

With all of London aghast at a mysterious succession of "pajama suicides," Holmes decides the deaths are diabolically planned murders committed by a mysterious woman.

The Good Comrades are a collection of varied gentleman residing at Drearcliff House, ancestral home of their eldest member. All seems serene until one by one the members begin to perish in the most grisly of manners. Foul play is suspected and Holmes is asked to investigate.