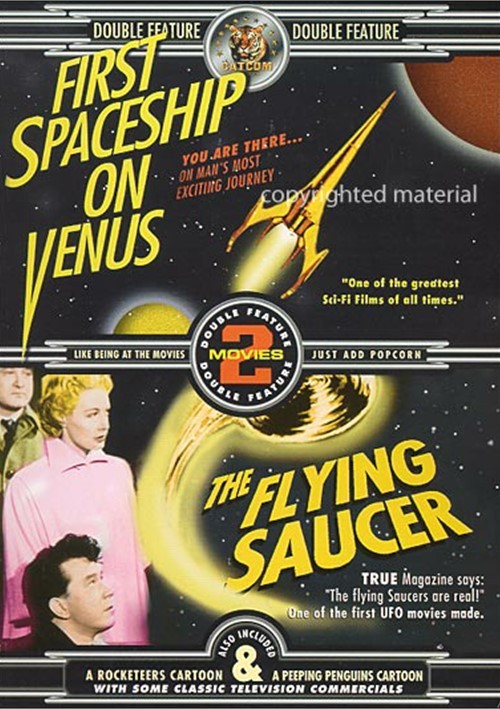 Like Being At The Movies, Just Add The Popcorn

First Spaceship On Venus, filled with spectacular special effects and imagery, is considered by some critics to be one of the greatest science fiction films ever made. When a blast at a construction sight turns up a spool of information from Venus, the government decides to build a spacecraft and journey to the second planet from the sun. On the way there, the message on the spool is decoded and it turns out to be battle plans for the upcoming invasion and conquest of Earth! ~~First Spaceship On Venus, using the best scientific information available at the time, has plenty of high-tech hardware, futuristic robots, stunning alien vistas, and an out of this world rocket ship that takes the crew of courageous space travelers on an exciting ride of a lifetime!

This classic, rare, and hard to find feature film is one of the first movies ever made to deal with the sci-fi phenomenon of flying saucers! Made during the early days of the Red Scare, The Flying Saucer clearly addresses the paranoia and fear of a communist invasion of North America! Filmed on location in the beautiful and breathtaking Alaskan outback, The Flying Saucer is full of intrigue, great special effects, Russian spies, and edge of your seat suspense. Keep your eyes open for a very young Denver Pyle (Uncle Jesse from Dukes Of Hazzard) in one of his very first screen appearances! Fasten your rocket belts and hold on tight for an out of this world experience!