Night Fright / They Came From Beyond Space (Double Feature) 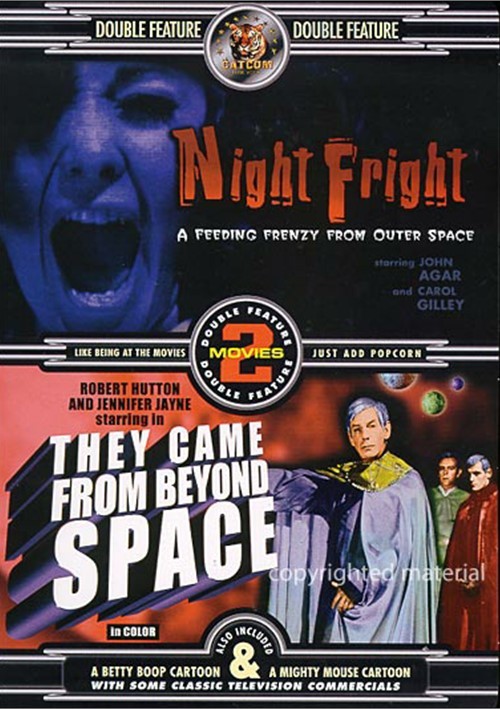 Something looking like a Flying Saucer has crash-landed close to the lake, just outside of town. The locals swear they saw it come down, but when the police investigate, there's not a trace of evidence to support their claim of an extra-terrestrial invasion! Now mysterious killings are beginning to plague the community, and the only clues are the Lizard-like footprints left behind at the scene of the grizzly crime. John Agar, former screen sensation and the first husband of Shirley Temple, stars in this low-budget but high thrills science fiction feature about a hungry alien using a small town as its own personal smorgasbord. Night Fright is a feeding frenzy from outer space that will fill your appetite for a scary and definitely campy good time!

They Came From Beyond Space

When meteorites crash land in the perfect formation of the letter V, the Ministry of Extraterrestrial Life on Other Planets (MELOP) springs into action! Britain's leading professor on the subject is in charge of finding out what's going on before it's too late! Fortunately he's got a metal plate in his head which prevents the Aliens from taking over his mind and f-rcing him to become slave labor on the moon! They Came From Beyond Space, directed by Freddie Francis(Glory, Dune, Cape Fear), is a well acted and fast paced thriller in a style similar to Invasion Of The Body Snatchers meet The Avengers! It's an out of this world, out of your mind sci-fi sensation!

Review "Night Fright / They Came From "

Reviews for "Night Fright / They Came From "