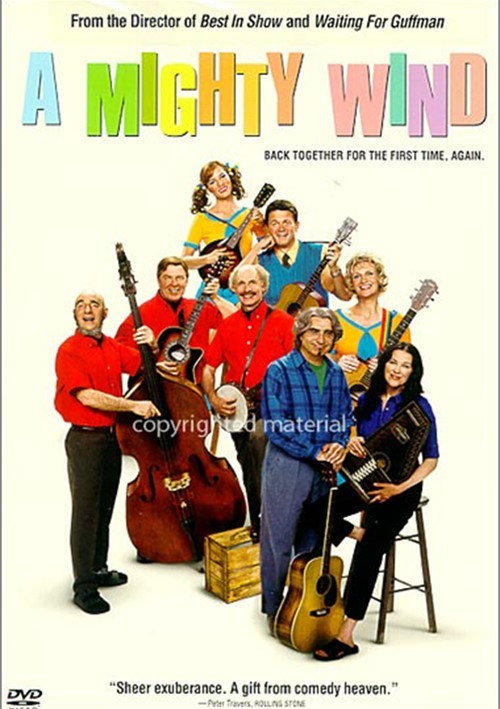 Back Together for the First Time, Again.

In A Mighty Wind, director Christopher Guest reunites the team from Best in Show and Waiting for Guffman to tell the story (co-written by Eugene Levy) of '60s-era folk musicians, who, inspired by the death of their former manager, get back on the stage for one concert in New York City's Town Hall.

Levy and Catherine O'Hara are Mitch and Mickey, once the sweethearts of folk music until their bitter separation; Guest, Michael McKean and Harry Shearer are classic folk trio The Folksmen, and Parker Posey, John Michael Higgins and Jane Lynch anchor a color-coordinated, harmonizing "neuftet" - the New Main Street Singers.

A Mighty Gust of Fabulous Extra Content:
Feature-Length Audio Commentary by Christopher Guest and Eugene Levy
Nearly a Half-Hour of Additional Scenes Including The Good Book Song, The Catheter Song, Folksmen Interview, The Bohners Meet Their Fans, and More
Live TV Broadcast of the Concert: The Climactic Benefit Show in its Entirety
"Vintage" TV Appearances of the Bands
Discover More About The Folksmen, The New Main Street Singers and Mitch & Mickey Via Biographies
Interactive Menus
Theatrical Trailer
Scene Access

Reviews for "Mighty Wind, A"