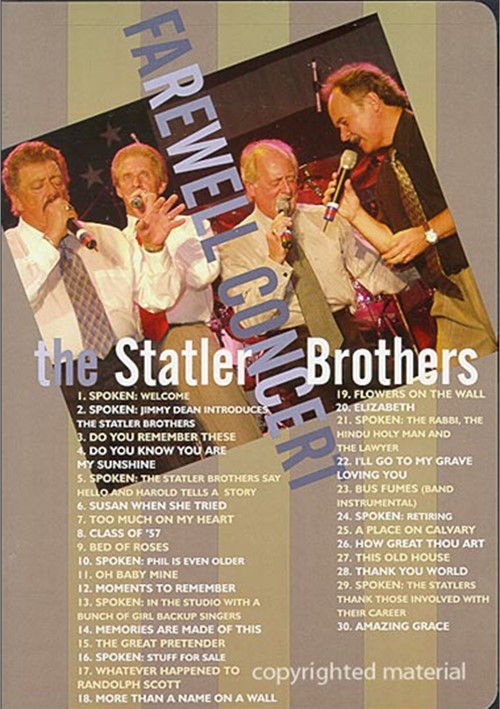 It all started on March 8, 1964: the touring, the recording, the TV shows-life as we would know it for the next 39 years. We, The Statler Brothers, traveled to Canton, Ohio, and opened a Sunday afternoon show for Johnny Cash. Other people on the show that day were Bill Anderson, Sonny James, George Hamilton IV, June Carter and The Tennessee Three. After the show John met us downstairs in one of the dressing rooms of the Canton Memorial Auditorium and asked us if we wanted to finish the tour with him. Having nothing better to do for the rest of our lives we said yes, and on a handshake we left that night in the caravan, driving an already worn out 1957 Cadillac limousine, heading for Rockford, Illinois, and the next concert.

After that it was Indianapolis, Indiana; Madison, Wisconsin; Green Bay; Duluth, Minnesota; Davenport, Iowa; and then back home to rest up a week or so and then back out to do it all over again. And it's been pretty much that way ever since.

Twenty-six days after this first meeting, on April 3, 1964, we were in the Columbia recording studio in Nashville, cutting out first record, compliments of ol' John. The cycle had begun. Our pattern had been laid and the die had been cast and our lives would never be the same again. We were mercifully in show business and show business was unmercifully in us. God help us and bless us.

It's all here for you to listen to and look at and relive with us: every moment, every emotion, every song. We thank all the people in our lives in the show and you'll hear who they are and what we said. But maybe the ones we overlooked and didn't thank were the ones we should take care of here and now. We'd like to thank each other-Harold and Phil and Jimmy and Don and what we have meant to each other professionally and personally: the hours and years we've spent together and the music and memories we've made together: the honesty of the sad times when we leaned on each other and the excitement of the good times we shared, what no one else ever saw. We've been through snow blizzards and hurricanes together. We've been through weddings and funerals together. We've traveled the globe together and had picnics in each other's backyards. That's friendship. And that's been our lives and our careers. That's been who we are and who we've become to one another. And we hope you've enjoyed it. We certainly have.

God help us and bless us one more time,

Do You Remember These

Do You Know You Are My Sunshine

Susan When She Tried

Too Much On My Heart

Memories Are Made Of This

Whatever Happened To Randolph Scott

More Than a Name On a Will

Flowers On the Wall

I'll Go To My Grave Loving You

A Place On Calvary

How Great Thou Art

Reviews for "Statler Brothers, The: Farewel"