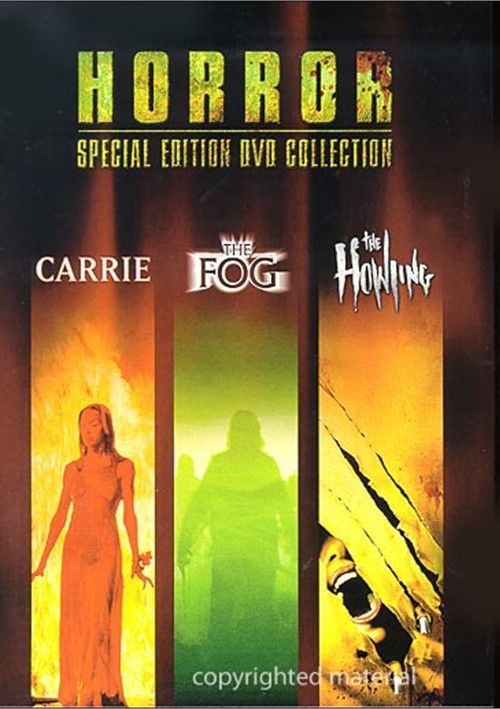 At the center of the terror is Carrie (Spacek), a d high-school misfit with no confidence, no friends... and no idea about the extent of her secret powers of telekinesis. But when her psychotic mother and sadistic classmates finally go too far, the once-shy teen becomes an unrestrained, vengeance-seeking powerhouse who, with the help of her 'special gift,' causes all hell to break loose in a famed cinematic frenzy of blood, fire and brimstone!

When the fog rolls in the terror begins! This moody and "crisply chilling" (Newsweek) horror classic from master of terror John Carpenter (The Thing) and co-writer Debra Hill (Escape from L.A.) stars Adrienne Barbeau (Swamp Thing), Jamie Lee Curtis (Halloween), OscarÂ® winner John Houseman (Rollerball) and OscarÂ® nominee Janet Leigh (Psycho). Get lost in the fog "it will frighten the daylights" (The Hollywood Reporter) out of you!

The sl--py seaside village of Antonio Bay is about to learn the true meaning of the word "vengeance." For this seemingly perfect town masks a guilty secret a past steeped in greed and murder. Exactly 100 years ago, a ship was horribly wrecked under mysterious circumstances in a thick, eerie fog. Now, shrouded in darkness, the long dead mariners have returned from their water grave to exact a bloody revenge. Can this waking nightmare be stopped, or will the fog keep rolling in to kill and kill again?

From the director of Gremlins and Piranha comes the ultimate masterpiece of primal terror. Filled with edge-of-your-seat suspense, "Genuine thrills [and] amazing special effects" (Us), this riveting werewolf tale sinks its teeth into your deepest fears and never lets go.

Severely shaken after a near-fatal encounter with a serial killer, TV newscaster Karen White (Dee Wallace, E.T.) takes some much-needed time off. Hoping to conquer her inner demons, she heads for "the Colony," a secluded retreat where her new neighbors are just a tad too eager to make her feel at home. Also, there seems to be a bizarre link between her would-be attacker and this supposedly safe haven. And when, after nights of being tormented by savage shrieks and unearthly cries, Karen ventures into the forest to find answers, she makes a terrifying discovery. Now she must fight not only for her life but for her very soul!

Making A Monster Movie: Inside The Howling Documentary