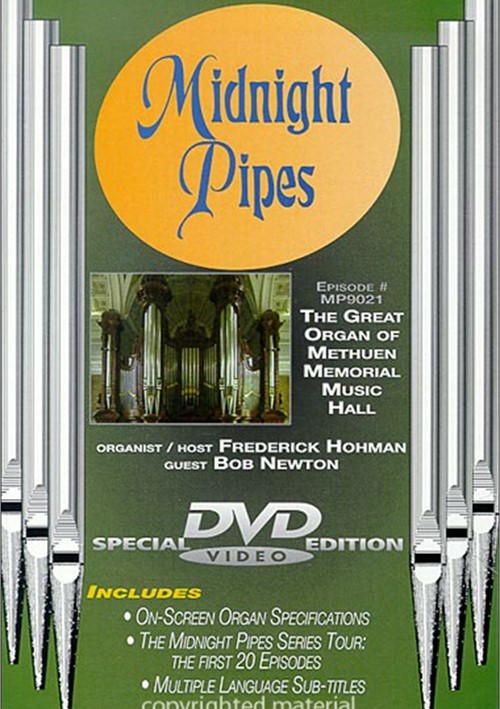 This time, organist/host Frederick Hohman takes us to the north eastern Massachusetts town of Methuem, near the banks of the Spicket River, where we find Methuen Music Hall - a hall designed to house and showcase America's first concert pipe organ.

In this video presentation, we see close up details of the interior of the opulent hall, as well as rare glimpses of the pipework behind the world's most impressive organ case, when we are led on a tour through the organ by the organ technician, Bob Newton. In addition, we hear organ classics in the hall's vibrant acoustics, as performed by our host. The organ, originally the Opus 200 (1863) of E.F. Walkcer and Company, now stands at 4 manuals, 5 division, 84 stops, 115 ranks and 6,027 pipes, with its modern renovation completed in 1947 by the Aeolian-Skinner Organ Company, Inc. (Opus 1103).

The Walcker Organ, originally built for Boston Music Hall, was removed only after 2 decades of service, and after a time in storage, it was acquired in 1897 by Edward F. Searles of Methuen. Mr. Searles commissioned the present hall, which seats about 350, in order showcase the instrument. In addition to special events throughout the year, the hall has enjoyed a decades long tradition of midweek summer recitals, featuring concert organists from throughout the world. The hall's preservation and management is administered by a non profit corporation, to which contributions are tax deductible.

Plus The Midnight Pipes Series Tour: The First 20 Episodes