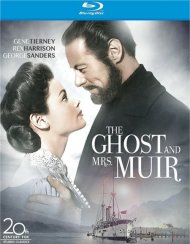 Recent widow Lucy Muir (Tierney) rents a house by the ocean, which turns out to be haunted by a cantankerous sea captain (Harrison). Although difficult at first, their friendship blossoms and the captain even "ghostwrites" an autobiographical book to bring in money for her. Eventually, the unlikely pair fall in love, only to be challenged when a flesh-and-blood suitor (George Sanders) appears on the scene.

With its heartwarming screenplay and Oscar-nominated cinematography, The Ghost and Mrs. Muir is a moving classic in Hollywood's best style.

Rex Harrison: The Man Who Would Be King As Soon On Biography on the A&E Nework

Reviews for "Ghost And Mrs. Muir, The (Repa"